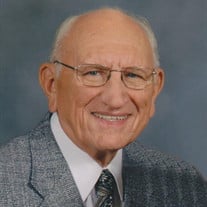 Delbert Kasperbauer, 91 of Carroll, died Monday, April 2, 2018 at Regency Park Nursing Home in Carroll. Mass of the Christian Burial will be celebrated at 10:30 a.m., Friday, April 6, 2018 at Holy Spirit Catholic Church in Carroll. The Celebrant will be Fr. Kevin Richter. Music will be by Barb McDermott and the Holy Spirit Choir. Lectors for the funeral mass will be Dwight and Pam Kasperbauer. Delbert’s grandchildren, Katelyn Sikkema and Mitchell Sikkema will present the offertory gifts. Eucharistic Minister will be Vern Seidl. Casket Bearers will be: Gary Kasperbauer, Aric Kasperbauer, Mitchell Sikkema, Katelyn Sikkema, Cody Wellington, and Dwight Kasperbauer. Burial will be in Mt. Olivet Cemetery in Carroll with military honors conducted by the Carroll American Legion. Friends may call at the Sharp Funeral Home in Carroll after 4 p.m. on Thursday where there will be a rosary at 5 p.m. and a Christian Wake Service at 6:30 p.m. The casket will be moved to Holy Spirit Church on Friday morning where visitation will resume at 9:30 a.m. and will continue until time of the funeral mass. Funeral arrangements are under the direction of the Sharp Funeral Home in Carroll and online condolences may be left for Delbert's family at www.sharpfuneral.com. Delbert, the oldest of four children, was born on March 12, 1927 at Dedham, Iowa, the son of Frank and Julia (Hofbauer) Kasperbauer. He graduated from Carrollton Consolidated School and later received his G.E.D. from Carroll Community School. Delbert entered the United States Army on September 6, 1950 and was honorable discharged on September 5, 1952. He served as Master Sergeant with the United States Army 2nd Division during the Korean War for nine months. On October 11, 1958 at St. Mary’s Catholic Church in Willey, Delbert was united in marriage to Delores Brincks, the daughter of Joseph A. and Mary (Von Bon) Brincks. The couple made their home in Carroll for their entire life. Delbert worked for Heider Manufacturing for over 30 years. He later drove school bus and also was employed at Hy-Vee. Delbert was a member of Holy Spirit Church and the Carroll American Legion. He enjoyed his family, golfing, and playing cards. Delbert is survived by his wife Delores Kasperbauer of Carroll; his children: Diane Passarello of Tullahoma, TN, Gary Kasperbauer of West Des Moines and Jane Sikkema of Carroll; 8 grandchildren; his sister, Betty (Chuck) Parrott of Michigan; his brothers: Ron (Carol) Kasperbauer of California and Dwight (Pam) Kasperbauer of Colorado; his sister-in-law, Diane Brincks of Carroll; as well as many nieces, nephews, other extended relatives and many friends. Delbert was preceded in death by his parents; his parents-in-law; and his brothers-in-law and sisters-in-law: Leonard (Louise) Brincks, Bernadine (Norbert) Rust, Agatha (Arnold) Hackfort, Roceal (Cy) Knobbe, Bernilda (Henry) Seidl, Alphons “Bud” (Ruth) Brincks, Melvina (Lawrence) Hahn and Donald Brincks.

The family of Delbert Kasperbauer created this Life Tributes page to make it easy to share your memories.

Send flowers to the Kasperbauer family.