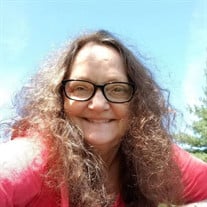 Deb Davis, age 62, of Carroll, died Friday, November 1, 2019 at her home in Carroll. Funeral services will be held at 10:30 a.m. Wednesday, November 6, 2019 at the Carroll First United Methodist Church in Carroll with Pastor Terry Plocher officiating. Burial will be in the Carroll City Cemetery. Honorary Pall Bearers will be Jeff Cayler, Mark Heino, Kevin Eischeid, Wes Niles, Jim McCullough, and Jon Baak. Current and Former Members of the Carroll Police Department will form an honor guard for the funeral service. Visitation will be held from 5 until 7 p.m. on Tuesday at the Sharp Funeral Home in Carroll. There will be no visitation prior to the funeral service on Wednesday morning. Funeral arrangements are under the guidance of the Sharp Funeral Home in Carroll, and online condolences may be left at www.sharpfuneral.com. Deborah Kay, daughter of Rev. H. Allen and Eileen (Besch) Wirtz, was born May 30, 1957, in Dubuque, Iowa. As a young girl, Deb lived in Estherville where Deb attended school through her tenth grade year. She subsequently graduated from Davenport Central High School in 1975. In the eighth grade Deb decided she wanted to be a police officer. She attained her Associate of Science degree in Law Enforcement from Black Hawk College in Moline, IL in 1977, and then a Bachelor of Arts degree in Sociology from Buena Vista College in 1980. That same year, she was hired by the Carroll Police Department as the city’s first female police officer and graduated from the Iowa Law Enforcement Academy. In 1997, Deb received trauma to her chest, ending her law enforcement career. She was then employed by Lou Walsh Motors until the business was sold in 2012. On February 14, 1990, Deb was united in marriage with Leigh Davis. Their favorite place to be was next to each other, they were inseparable. The only time they were apart was in 2004-2005 when Leigh was deployed to Afghanistan. Deb was a Family Readiness Group (FRG) co-coordinator during Leigh’s deployment and received many awards in this role. Deb loved being an Army wife and was a great supporter of all soldiers, mailing letters and care packages to over 40 military friends during various deployments and referring to them as “her” soldiers. In 2015, when Leigh’s health deteriorated, Deb became his full-time caregiver until his passing on December 29, 2015. Deb was a faithful member of the First United Methodist Church in Carroll. She was a fan of NASCAR and enjoyed blogging, reading, scrap-booking, and writing letters to family and close friends. She and Leigh enjoyed going on cruises and watching movies at home. Deb took pride in always having a spotless home and considered her pets, Bowser, Bear, Bandit and Blooper, all deceased, her children. Deb donated her hair four times to Locks of Love, and arranged for a 5th and final donation to be made after she passed away. She wanted to be remembered for being kind to everyone. Left to cherish her memory are her mother, Eileen Wirtz of Carroll, IA; sister, Vicki McGowan of Moline, IL; brother Allen (Nancy) Wirtz of Glendale Heights, IL; nephews and nieces Luther Wirtz (Emily Heninger), Brendyn Wirtz, Sydney Wirtz, Melissa McGowan, Debbie (Travis Pulse) McGowan, Anna Rath; great nieces/nephews Olivia (Connor Coughlin), Sydney, Brooklyn and Manuel and great-great niece Mikayla; Step-son, Steve (Vanessa) Germany; grand-daughter Taryn. Deb was preceded in death by her beloved husband Leigh in December 2015; her dad, Rev. H. Allen Wirtz; cousins Brian Besch and John “Jack” McCullough; her grandparents and several aunts and uncles.

The family of Deb Davis created this Life Tributes page to make it easy to share your memories.

Send flowers to the Davis family.