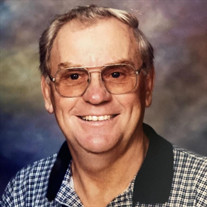 Dean Lawrence Ludwig, 81 of rural Lake City, died Monday, May 9, 2022, at Thomas Rest Haven in Coon Rapids. Mass of the Christian Burial will be celebrated at 10 a.m. Saturday, May 14, 2022, at Holy Spirit Church – St. John Paul II Parish in Carroll. The Celebrant will be Fr. Kevin Richter. Concelebrant will be Fr. Craig Collison. Mass servers will be Maximus Hardy and Anna Berns. Music will be by Kathy Halbur, Derrik Bauer, and Stephanie Berns. Lector for the Funeral Mass will be Michael Hardy. Gift Bearers will be Emma Reis, Megan Hardy and Mariah Hardy. Honorary Casket Bearers will be Maximus Hardy and Brody Reis. Casket Bearers will be Alex Cornelius, Brandon Cornelius, Nolan Ford, Clayton Reis, Tyler Reis and Matthew Hardy. Burial will be at 12:30 p.m. on Saturday at Holy Family Cemetery near Lidderdale with military honors conducted by the Carroll American Legion. Visitation will be held from 5-7 p.m. on Friday at the Sharp Funeral Home in Carroll with a rosary at 7 p.m. Additional visitation will be from 9-9:45 a.m. on Saturday at the church. Funeral arrangements are under the guidance of the Sharp Funeral Home in Carroll and online condolences may be left for Dean’s family at www.sharpfuneral.com. Born on October 8th, 1940, in Lake City, Iowa Dean was the son of Arnold and Rose (Boes) Ludwig. He attended Kuemper High School in Carroll, Iowa and graduated in 1959. Dean served in the U.S. Army from 1963 to 1965 and was stationed at Fort Richardson near Anchorage, Alaska, where he survived the earthquake of 1964. After his honorable discharge from the Army, he returned to the family farm. On March 3, 1973, Dean was married to Diana (Kirsch) Pletchette at St. Lawrence Catholic Church in Carroll, Iowa. They lived on a farm six miles south of Lake City, where he farmed the Ludwig Family ground and his own farm. Diane passed away on February 16, 1980, leaving Dean to raise his four daughters on his own. In his spare time Dean enjoyed buying and selling items at auctions and garage sales with his brothers. He was a collector of antique toys and miscellaneous items. He was an avid Iowa Hawkeye fan. He loved watching westerns. He enjoyed playing cards with his siblings and even participated in Euchre tournaments. Dean loved spending time with his children and grandchildren. He was also a master fisherman with his proudest moment being the time caught his biggest fish, an enormous catfish of 49 pounds on an 8 lb. test line out of a pond. Dean was a former member of Holy Family Catholic Church in Lidderdale, Iowa. In 2017, Dean retired from farming and moved to Swan Place in Carroll and then to Journey Senior Services in Carroll. Surviving are his four daughters: Susan (Dan) Cornelius of Lake City, Rhonda Ford (Dwane Bolton) of Rockwell City, Christine (Michael) Hardy of Lohrville, Brenda (Brian) Reis of Rolfe; his thirteen grandchildren: Alex (Jessica Peters), Brandon (Megan), Jessica, and Zoe Cornelius, Nolan Ford, Megan (fiancé Colin Corey), Mariah, Matthew and Maximus Hardy, Clayton, Tyler, Emma and Brody Reis; five great-grandchildren; his two brothers: Eldon (Deborah) Ludwig of Carroll, James (Dee) Ludwig of Carroll; his four sisters: LouAnn (James) Klocke of Edgewood, Washington, Karen (Steve) Goins of Yetter, Judy (John) Strunk of Carroll, Mary Jo (Mark) Bauer of Jefferson; his brothers-in-law and sisters in-laws: Andy Kirsch, Duane (Betty) Kirsch, Monica (Norm) Nellesen, Virgil (Peggy) Kirsch, Lucy Kirsch and Lloyd Drees; as well as many nieces and nephews. He was preceded in death by his wife, Diane; his parents, Arnold and Rose Ludwig; his in-laws, Andrew and Leona Kirsch; a granddaughter, MacKenzie Ford; a sister, Dorene Ludwig; his sisters-in-laws: Janice Klocke, Mary Ann Kirsch, Shirley Kirsch and Mercedes Drees; his brothers-in-laws Art Kirsch, Jerome Kirsch and LeRoy Klocke, two nephews: Benjamin and Shane Ludwig.

The family of Dean Ludwig created this Life Tributes page to make it easy to share your memories.