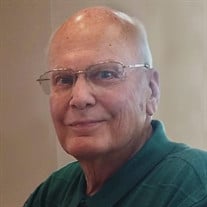 Darrell Schettler, 73 of Carroll, died Wednesday evening at St. Anthony Regional Hospital in Carroll. Mass of the Christian Burial will be celebrated at 10:30 a.m., Monday, December 4, 2017 at Holy Spirit Catholic Church in Carroll. The Celebrant will be Fr. Kevin Richter. Music will be by Mary Blinn. Lectors for the funeral mass will be: Paul LaLiberte and Susan Schettler. Gift Bearers will be: Karen Boyce and Bob Schettler. Eucharistic Minister will be Alex Boyce. Casket Bearers will be: Bob Schettler, Loren Boyce, Aaron Boyce, Dave Grote, Dave Jorgensen, and Chad Davis. The Carroll American Legion will form an honor guard for the funeral mass. Burial will be at 10 a.m., Wednesday in Merle Hay Memorial Cemetery near Glidden. Friends may call at the Sharp Funeral Home in Carroll after 4 p.m. on Sunday where there will be a Christian Wake Service at 6 p.m. The casket will be moved to Holy Spirit Church on Monday morning where visitation will resume at 9:30 a.m. and will continue until time of the funeral mass. Funeral arrangements are under the direction of the Sharp Funeral Home in Carroll and online condolences may be left for Darrell's family at www.sharpfuneral.com. Born on June 2, 1944 in Omaha, Nebraska, Darrell was the son of Cyril and Marian (Reising) Schettler. He spent his younger years in the Breda area and graduated from St. Bernard’s High School. Following his schooling Darrell served in the United States Navy from 1963-1966. While in the Navy he was married to Sarah Snook at St. Lawrence Church in Carroll on July 17, 1965. Following his honorable discharge, Darrell and Sarah made their home in Carroll. He assisted his father for a brief time with Schettler Studios and then began his 43 year career with Pepsi-Co in Carroll until his retirement in 2009. In retirement Darrell worked in the mail room at the Daily Times Herald and also did maintenance at JCPenney in Carroll. Darrell enjoyed tinkering and fixing pretty much anything. An outdoor enthusiast, he loved tending to his flower garden and doing yard work. He also enjoyed biking and listening to bluegrass music. Darrell was a member of Holy Spirit Church in Carroll where he was a faithful member with the Celebration Choir. Survivors include his wife Sarah Schettler of Carroll; his children: Bob Schettler of Imperial, CA and Karen (Loren) Boyce of Carroll; his grandchildren: Alex Boyce, Aaron Boyce, Micaela Boyce, and Johnmark Schettler; his siblings: Emily (Bob) Morris, Bill (Sue) Schettler, Mary (Paul) LaLiberte, Robert Schettler, David (Kathy) Schettler, and Cecilia (Wesley) Ehrecke; his sisters-in-law and brother-in-law: Arlene Schettler, Denine Schettler, Marlene Main and Raymond (Paulette) Snook; as well as many nieces, nephews, other extended relatives and many friends. Darrell was preceded in death by his parents; and his brothers: Milton, Charles, Michael and Bernard Schettler.

The family of Darrell Schettler created this Life Tributes page to make it easy to share your memories.