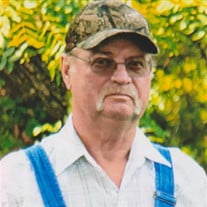 Darrell Pudenz, age 64, of rural Carroll, died Friday, October 11, 2019 at his home following a courageous battle with cancer. Mass of the Christian Burial will be celebrated at 10 a.m. Tuesday, October 15, 2019 at Our Lady of Mt. Carmel Catholic Church in Mt. Carmel. The Celebrant will be Fr. Timothy Friedrichsen. Con-Celebrant will be Fr. Lynn Bruch. Music will be by Nancy Lemker, and the Our Lady of Mt. Carmel Choir. Lector will be Nick Fangman. Gift Bearers will be Darrell’s Family: Gwen, Trinity, and Tristen. Casket Bearers will be Randy Drees, Terry Molle, Troy Schon, John Heuton, Dick Wernimont, Scott Lenz, and Andre Angrick. Burial will be at 12:45 p.m. in the Lanesboro Cemetery, near Lanesboro with military honors conducted by the Breda American Legion. Friends may call at the Sharp Funeral Home in Carroll after 4 p.m. on Monday where there will be a Prayer Service held at 7 p.m. The casket will be moved to Our Lady of Mt. Carmel Church on Tuesday morning where visitation will continue from 9-9:45 a.m. Funeral arrangements are under the guidance of the Sharp Funeral Home in Carroll, and online condolences may be left for Darrell’s family at www.sharpfuneral.com Darrell William Pudenz was born on August 29, 1955 in Carroll, Iowa. The son of Leon and Norma Jean (Bartlett) Pudenz, he grew up near Carroll, and graduated from Carroll High School in 1974. Following high school, Darrell enlisted in the United States Army and served three years stationed in Germany. Upon his honorable discharge from the Army, Darrell returned to Carroll, and drove truck for Bud Freeman, and later became a self-employed truck driver. On August 17, 1984 Darrell was united in marriage to Sandra Knueven at St. Bernard’s Catholic Church in Breda. The couple lived in various locations in the Carroll area before settling on their acreage north of Carroll. Darrell was a member of Our Lady of Mt. Carmel Catholic Church, and the Breda American Legion. Darrell is survived by his wife Sandy of rural Carroll; a son Daniel Pudenz and Trisha of Wilton; grandchildren: Gwen Pudenz, Trinity and Tristen of Wilton; four sisters: Deb (Michael) Daniel of Lohrville, Donna Pudenz of Carroll, Joyce Pudenz-Peterson of Overland Park, KS, and Jeanine (Carl) Van Gorp of Elkhart; a brother: Tom (Diane) Pudenz of Carroll, and other extended relatives and friends. Darrell was preceded in death by his parents Leon and Norma Jean Pudenz; his parents-in-law Louis and Arlyne Knueven, a granddaughter Addison June Pudenz in 2011, and his brother-in-law, Mark Peterson.

Darrell Pudenz, age 64, of rural Carroll, died Friday, October 11, 2019 at his home following a courageous battle with cancer. Mass of the Christian Burial will be celebrated at 10 a.m. Tuesday, October 15, 2019 at Our Lady of Mt. Carmel... View Obituary & Service Information

The family of Darrell Pudenz created this Life Tributes page to make it easy to share your memories.