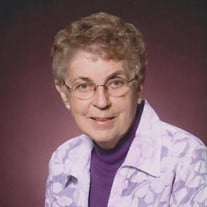 Darlene Leiting, 89 of Arcadia, died Friday, August 20, 2021, at Regency Park Nursing Home in Carroll. Mass of the Christian Burial will be Celebrated at 10:30 a.m., Tuesday, August 24, 2021, at St. John’s Catholic Church in Arcadia. The Celebrant will be Fr. Merlin Schrad. Concelebrant will be Fr. Richard Remmes. Music will be by Sharon Bierl and the parish choir. Lector for the Funeral Mass will be Peg Scheidt. Gift Bearers and Honorary Casket Bearers will be Emma, Mollie, and Madison Leiting. Eucharistic Minister will be Pat Vogl. Casket Bearers will be Steve Wonderlin, Matt Wonderlin, Nick Wonderlin, Zach Wonderlin, Duane Hanrahan, and Lyle Hanrahan. The Arcadia American Legion Auxiliary will form an honor guard for the Funeral Mass. Burial will be in St. John’s Cemetery in Arcadia. Visitation will begin with a rosary at 5 p.m. by the Christian Mothers and continue until 7 p.m. on Monday at the Sharp Funeral Home in Carroll. Funeral arrangements are under the guidance of the Sharp Funeral Home in Carroll and online condolences may be left for Darlene’s family at www.sharpfuneral.com. Darlene was born on August 10, 1932, at Dedham, Iowa, the daughter of Frank and Emma (Seidl) Wiskus. She grew up on the family farm near Dedham and attended St. Joseph School. Her family later moved to Carroll where she graduated from St. Angela’s Academy in 1950. On June 1, 1957, Darlene was united in marriage to Gene Leiting. The couple farmed southwest of Arcadia until Gene’s passing in 1986. Darlene continued to live on the farm until 1998 when she moved to Arcadia. She was a lifelong parishioner at St. John’s Parish, Parish Ladies Guild, and a member of the Arcadia American Legion Auxiliary since 2005. Darlene was also past president of Christian Mothers, served on the parish council, and was organist for the church and choir since 1984 which she thoroughly loved and enjoyed. She also enjoyed listening to the radio and CDS, going to the casino, and playing euchre and rummikub with friends. Survivors include her daughter Jane Wonderlin and husband Doug of Ankeny, her son Neil Leiting and wife Lisa of Westside; her grandsons: Steve (Kristen) Wonderlin, Matt (Ashley) Wonderlin, and Nick (Jordan) Wonderlin; her granddaughters: Emma Leiting, Mollie Leiting, and Madison Leiting; her great-grandsons: Zachary, Blake, Owen, Brantley, Gable Wonderlin; great-granddaughters: Gracyn and Lilly Wonderlin, and one on the way; as well as many nieces, nephews, and other extended relatives. Darlene was preceded in death by her parents; her husband Gene in 1986; her brothers: Alfred, Clarence and Louis in infancy; and her sisters: Florence Balk, Tillie Wiskus, Dorothy Schreck, Sr. Christille Wiskus FSPA, Leonilla Wiskus and Geneva Dentlinger; her brothers-in-law and sisters-in-law: Clem Balk, John Schreck, Wilbert Dentlinger, Eileen Wiskus, Ella Wiskus, Gloria Wiskus, and Leo and Marian Hanrahan.

The family of Darlene Leiting created this Life Tributes page to make it easy to share your memories.

Send flowers to the Leiting family.