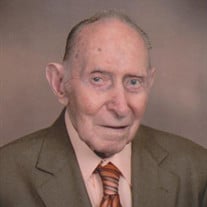 Daniel Wiehn, age 95 of Carroll, died on Wednesday, July 28, 2021 at Regency Park Nursing and Rehabilitation in Carroll. Mass of the Christian Burial will be celebrated at 10:30 a.m. on Tuesday, August 3 at St. John Paul II Parish - St. Lawrence Church in Carroll. The Celebrant will be Fr. Kevin Richter with the assistance of Deacon Dennis Wiehn. Music will be provided by Kathy Halbur and Sherry Loughran. Lector for the service will be Tom Espenhover. Gift Bearers will be Heather Knute, Andrea Monahan, Ashley Biederman, Addison Knute, Charlotte Knute, Mckenna Monahan, Crew Monahan, Caleb Monahan, Laythm Biederman, and Ainhoa Biederman. Casket Bearers will be Tony Knute, Travis Biederman, Galen Miller, Lyle Miller, Kevin Wiehn, and Jim Wiehn. Burial will follow in the Mt. Olivet Cemetery in Carroll. Military Honors will be conducted by the Carroll American Legion. A live-stream and recording is available at the following link: https://youtu.be/LIHxFcSuay4 A visitation will be held Monday at the Sharp Funeral Home in Carroll from 5:00 p.m. until 7:00 p.m. where a Rosary will be prayed at 5:30 and a Christian Wake Service will begin at 7:00. An additional visitation will be held on Tuesday at the church from 9:30 a.m. until 10:15 a.m., prior to the start of the funeral mass. Memorial contributions may be directed to the family for a designation that will be decided at a later date. Arrangements are under the guidance of Sharp Funeral Home in Carroll, and online condolences may be left for Dan's family at www.sharpfuneral.com. Dan was born on February 13, 1926 to Dan and Jennie (Lampman) Wiehn in Elgin, Nebraska. He finished 8th grade and then moved to Pierce, Nebraska where his folks had moved. In the fall of 1941, Dan was forced to quit school and begin farming. In 1945, He was drafted for the war. Dan served two years in the United States Army until he was honorably discharged. On August 26, 1952, Dan married Delores Turner in Raeville, Nebraska. In 1954, the couple moved to Dedham where Dan worked on a farm. Dan worked several jobs, but for over 20 years he worked for Farmland in Denison until he retired. After retirement, Dan began to mow lawns and do gardening until his health began failing. As a longtime member of St. Lawrence Church, Dan was a member of the Knights of Columbus. For his numerous years of dedicated service, he was pinned as a Life member for the Knights. Dan loved watching the Chicago Cubs and Westerns on TV. He thoroughly enjoyed playing bingo and playing cards with friends, too, where he always had a beer or his favorite, Black Velvet with water, no ice. Dan especially loved gathering with his family and friends. The highlight of his life was watching his grandkids sporting events and activities, and playing pool with his son, Dale. He was a wonderful husband, father, grandfather, and friend. Those left to cherish Dan’s memory include his children: Doris (Bruce) Knute of Glidden, Dale Wiehn of Carroll, and Donna Kelley of Sioux City; five grandchildren: Tony (Caitlyn) Knute, Heather Knute, Andrea (Zach) Monahan, Travis Biederman, and Ashley Biederman; seven great-grandchildren: Caleb, McKenna, Crew Monahan, Addison and Charlotte Knute, Laythm and Ainhoa Biederman, with 1 great-grandchild on the way; siblings-in-law: Darlene (Ed) Roberts of Mt. Pleasant, South Carolina and Sylvester "Vet" Turner of Eudora, Arkansas; nieces, nephews, cousins, and friends. Dan was preceded in death by his parents Dan and Jennie Wiehn, his wife Delores in 2020, his brothers and their wives: Lawrence and Leona, Leonard and Theresa, Henry and Gertrude, Jack and Dorothy, and his sister and her husband: Laurine and Ed Miller.

The family of Daniel Wiehn created this Life Tributes page to make it easy to share your memories.

Send flowers to the Wiehn family.