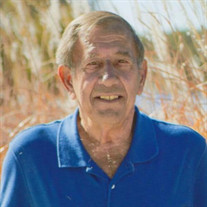 Daniel Hoffman, 81 of Dedham, died Wednesday, February 10, 2021 at St. Anthony Regional Hospital in Carroll. Mass of the Christian Burial will be celebrated at 10:30 a.m., Tuesday, February 16, 2021 at St. Joseph's Catholic Church in Dedham. The Celebrant will be Fr. Patrick Behm, assisted by Deacon Louis Meiners. Music will be by Cindy Bauer and Steve Seidl. Lectors will be Jodi Hoffman and Alice Behrens. Casket Bearers will be Dave Hoffman, Chris Hoffman, Kevin Hoffman, Kim Nelson, Larry Olson, and Bill Schultes. Burial will be in St. Joseph's Cemetery in Dedham with military honors conducted by the Dedham American Legion. Visitation will be held from 5-7 p.m. on Monday at the Sharp Funeral Home in Carroll. Additional visitation without greeting the family will be held on Tuesday at the church from 9:30-10 a.m. Those in attendance are required to wear a face covering. A livestream of the funeral mass will be available on Fr. Patrick Behm’s YouTube channel at https://www.youtube.com/channel/UC9hi3ngYGdwU7DIwWMzvLIQ/featured. Funeral arrangements are under the guidance of the Sharp Funeral Home in Carroll and online condolences may be left for Dan's family at www.sharpfuneral.com. Dan Hoffman was born on September 11, 1939 in Carroll, Iowa, the son of Henry and Kathryn (Nagl) Hoffman. He attended St. Joseph’s Catholic grade school and Kuemper High School graduating in 1957. After high school, Dan worked for Ocoma Foods for a year, and then helped his father farm. He joined the United States Army in 1962. Following his time in the Army, Dan returned home to Dedham to farm. On August 5, 1967 Dan was united in marriage to Edith Wolterman at St. Bernard’s Catholic Church in Breda. This union was blessed with the birth of three children: Ann, Scot, and Brad. Dan was a lifelong farmer north of Dedham. He raised cattle, hogs, corn, and beans. He lived on the same farm all his life and belonged to St. Joseph Catholic Church his entire life. He loved sharing his vegetables with neighbors, friends, and the food pantry. He loved nature and the outdoors. Dan loved gardening, fishing, hiking, Indian artifacts, and reading. He could read a book a day, and he was not hesitant to re-read any books he had already read. Dan loved spending time with his family, and he was always willing to volunteer his time for any community activity. For over 30 years, Dan was a leader of the Boy Scouts. Dan is survived by his wife Edith of Dedham; children: Ann (Taz) Hamrick of Culebra, Puerto Rico, Scot Hoffman of Des Moines, and Brad Hoffman of Dedham; granddaughter Lily Hoffman; sister-in-law Twila Hoffman; sisters: Ruth Naberhaus and Eunice (Jerry) Venteicher; and several other family members and friends. He was preceded in death by his parents Henry and Kathryn Hoffman; his in-laws Louie and Loretta Wolterman; sister Shirley (Kenneth) Nelson; brother Maurice Hoffman; and brother-in-law Gene Naberhaus.

The family of Daniel Hoffman created this Life Tributes page to make it easy to share your memories.