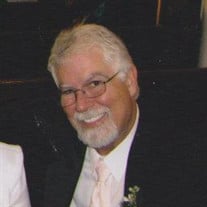 Dan Goins, age 66, of Carroll, died Monday, November 11, 2019 at Mercy One in Des Moines. Mass of the Christian Burial will be celebrated at 10 a.m. Friday, November 15, 2019 at St. Lawrence Catholic Church in Carroll. The Celebrant will be Fr. Shinoj Jose. Music will be by Jane Heithoff and the St. Lawrence Choir. Lector for the Funeral Mass will be Claire Morris. Casket Bearers will be: Eric Goins, Kevin Boyce, Josh Arellano, Andy Goins, Justin Goins, Ben Goins and Tony Brinker. Burial will be in Mt. Olivet Cemetery in Carroll. Friends may call at the Sharp Funeral Home in Carroll after 5 p.m. on Thursday where there will be a Christian Wake Service held at 6:30 p.m. The casket will be moved to St. Lawrence Church on Friday morning where visitation will resume from 9 to 9:45 a.m. Funeral arrangements are under the guidance of the Sharp Funeral Home in Carroll, and online condolences may be left for Dan’s family at www.sharpfuneral.com. Dan, the son of Paul “Kelly” and Patricia (Loftus) Goins was born on December 24, 1952 in Carroll, Iowa. He grew up in Carroll and graduated from Carroll High School in 1971. Dan enrolled at the Brown Institute in Minneapolis, Minnesota where he studied Television and Radio Broadcasting. After his schooling Dan worked in Ft. Dodge in radio for a brief time. Wanting a change, Dan moved to Fairbanks, Alaska, and later Anchorage, Alaska where he worked as a Technical Director for television stations in both markets. It was in Anchorage, where Dan met Lisa McClendon and they were married on July 24, 1978. They made their home in Anchorage for a brief time, before returning to Carroll where Dan assisted in his father’s business, Kelly Coin Machine Company. Dan would later purchase the business, and he continued to operate it until the time of his passing. Dan enjoyed playing music, and listening to the Beatles. He also enjoyed magic, movies, reading, and attending Friday night football games in Carroll. He was an avid New York Jets Fan. Most of all Dan cherished his three granddaughters, and especially driving them around in his golf cart. Left to cherish Dan’s memory is his wife Lisa of Carroll; children: Eric Goins and his daughter Addison of West Des Moines; Justin Goins of Carroll; and Kaytie (Kevin) Boyce and their daughters Averyhart and Penelope of Carroll; his siblings: Dave (Dorene) Goins of Omaha, Rick Goins of Sioux City, Claudia (Matt) Loneman of Carroll; as well as many nieces, nephews, and other extended relatives and friends. Dan was preceded in death by his parents; Kelly and Pat Goins; sister-in-law: Lynette Goins, and a brother-in-law: Mac McClendon.

Dan Goins, age 66, of Carroll, died Monday, November 11, 2019 at Mercy One in Des Moines. Mass of the Christian Burial will be celebrated at 10 a.m. Friday, November 15, 2019 at St. Lawrence Catholic Church in Carroll. The Celebrant will... View Obituary & Service Information

The family of Dan Goins created this Life Tributes page to make it easy to share your memories.

Send flowers to the Goins family.