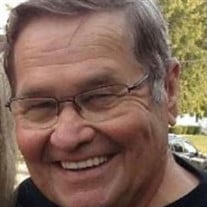 The direct link to the livestream can be found by clicking here: https://youtu.be/Fct5F04kghc It can also be found by visiting the Sharp Funeral Home YouTube page at https://www.youtube.com/channel/UCqd2eeRJk5RTdEJoEooUoAQ. Dale Stork, age 77, of Carroll, died Friday, November 19, 2021 at his home in Carroll. Mass of the Christian Burial will be celebrated at 1:30 p.m. on Wednesday, November 24, 2021 at Holy Spirit Church – St. John Paul II Parish in Carroll. The celebrant will be Fr. Kevin Richter. Music will be by Kathy Halbur. Lector will be Dustin Dinning. Gift Bearers will be Dale’s grandchildren and great-grandchildren. Eucharistic Minister will be Cheryl Stork. Honorary Casket Bearers will be Bernie Janning, Ron Meiners, Clint and Lori Petersen, Dave Borkowski, Lynn Pudenz, Pat Derner and Lynn Schmitt. Casket Bearers will be Alyson Stork-Fleming, Emily Ridout, Nick Steinbach, Tyson Rust, Nick Rohde, Jeff Stork, and Dan Otto. Burial will be in Mt. Olivet Cemetery in Carroll with military honors conducted by the Carroll American Legion. Visitation will be held from 5 to 7 p.m. Tuesday at the Sharp Funeral Home in Carroll. The casket will be moved to Holy Spirit Church on Wednesday where visitation will resume from 12:30 to 1:15 p.m. Funeral arrangements are under the guidance of the Sharp Funeral Home in Carroll and online condolences may be left for Dale’s family at www.sharpfuneral.com. Dale, the son of Conrad and Marguerite (Wiederin) Stork was born on August 21, 1944 in Carroll, Iowa. He grew up near Breda. After his formal education, Dale was inducted into the United States Army and proudly served his country from 1965 to 1967, serving predominantly in Germany. Upon his honorable discharge, he returned to the Carroll area where he began working for Witt Flooring. On July 31, 1971 he was united in marriage to Jolene Rust at Holy Spirit Catholic Church in Carroll. The couple made their home in Carroll where Dale worked for Juergens Feed and Produce; a career that lasted for forty years. Dale enjoyed bowling, woodworking, and classic cars. Dale owned a Chevy El Camino, in which he won many awards in the various car shows he attended. He also enjoyed watching drag racing and socializing with many friends and family. Most of all, Dale enjoyed spending time with his family. Dale was a member of St. John Paul II Parish in Carroll. Left to celebrate Dale’s life are his children: Kim (Jeff) Irlbeck of Carroll, and Kelly (Marc) Snavely of Colo; five grandchildren: MacKenzie (Adam) Wittrock of Carroll, Bret (Journey) Stork of Carroll, Chris Irlbeck of Carroll, Kerrington Snavely of Omaha, NE and Max Snavely of Colo; four great-grandchildren: Charlotte and Callahan Stork and Corbyn and Raegan Wittrock; Dale’s significant other, Elaine Corsbie of Carroll, and her children and families: Amy (Geno) Nelsen of Johnston and Tricia (Robert) Killian of Johnston. Also surviving are Dale’s siblings: Gary (Kate) Stork of Omaha, NE, Doug (Kerry) Stork of Portludow, WA, and Dean (Cheryl) Stork of Carroll; brothers-in-law Bill (Karen) Rohde of Sunrise Beach, MO, Dave Rust of Carroll, and sister-in-law Joyce Steinbach of Carroll; his stepfather: Ed Reiling of Carroll and his children and families as well as many nieces, nephews, and other extended relatives and friends. Dale was preceded in death by his wife Jolene in 2002, his parents, Conrad and Marguerite; his parents-in-law: Norbert and Bernadine (Brincks) Rust; siblings: Dan Stork, Ron Stork, Gene Stork, Neil Stork, John Stork, Marilyn Rohde, Jan (Gary) Otto; sister-in-law: Sharon Horton; brothers-in-law: Jerry Rust, and Andy Steinbach.

The direct link to the livestream can be found by clicking here: https://youtu.be/Fct5F04kghc It can also be found by visiting the Sharp Funeral Home YouTube page at https://www.youtube.com/channel/UCqd2eeRJk5RTdEJoEooUoAQ. Dale Stork,... View Obituary & Service Information

The family of Dale Stork created this Life Tributes page to make it easy to share your memories.

The direct link to the livestream can be found by clicking here:...

Send flowers to the Stork family.