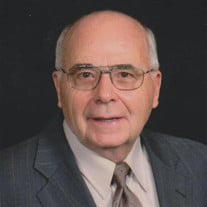 Cletus Henry Brincks, 78 of Carroll, died Monday, April 15, 2019 at St. Anthony Regional Hospital in Carroll. Mass of the Christian Burial will be celebrated at 10:30 a.m., Tuesday, April 23, 2019 at St. John Paul II Parish – St. Lawrence Church in Carroll. The Celebrant will be Fr. Shinoj Jose. Music will be by Kate Cuddy and the St. Lawrence Choir. Lector and Cross Bearer will be Phil Phillips. Gift Bearers will be Alan and Bev Brincks. Eucharistic Ministers will be: Bonnie Danner, Michele Phillips, and Lynette Lehrter. Casket Bearers will be: Cory Eischeid, Steve Hoffman, Keith Brincks, Kevin Brincks, Scott Brincks, and Carl Brincks. Burial will be in St. Mary’s Cemetery in Willey. Friends may call at the Sharp Funeral Home in Carroll after 5 p.m. on Monday where there will be a Christian Wake Service at 6:30 p.m. The casket will be moved to St. Lawrence Church on Tuesday morning where additional visitation will be held from 9:30-10:15 a.m. Funeral arrangements are under the direction of the Sharp Funeral Home in Carroll and online condolences may be left for the Brincks family at www.sharpfuneral.com. Cletus was born on August 17, 1940 at Willey, Iowa, the son of Joseph and Katherine (Hoffman) Brincks. He spent his younger years in the Willey area and later graduated from Kuemper Catholic Schools. In his younger years Cletus was a hog farmer and later farmed near Fonda until his retirement. He still stayed active in his farms and loved traveling the countryside looking at the crops. Cletus had a strong faith and was a member of St. John Paul II Parish- St. Lawrence Church. Cletus is survived by his daughter, Annette Louise Brincks of Des Moines; his granddaughter, Madison Miller; his siblings: Albert Brincks of Carroll, Ray (Ruth) Brincks of Carroll, Louise (Jack) Clark of Everly, Bonnie Anthofer of Carroll, Larry (Lynn) Brincks of Carroll, Marvin (Gloria) Brincks of Alta Vista, and Dennis (Cindy) Brincks of Atlanta, Georgia; as well as many nieces, nephews, and other extended relatives. Cletus was preceded in death by his parents; his sisters: Julitta Behrens, Helen Tiefenthaler, Elsie Eischeid, and Katherine Broich; and his in laws: Theresa Brincks, Hank Broich, Ed Anthofer, Marvin Eischeid, and Ervil Tiefenthaler.

The family of Cletus Brincks created this Life Tributes page to make it easy to share your memories.