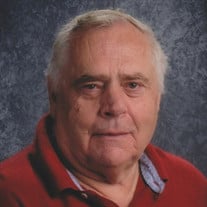 Cletus Behrens, 77 of Carroll, died Saturday, October 6, 2018 at St. Anthony Regional Hospital in Carroll. Private family services will be held on Wednesday, October 10, 2018 at the Sharp Funeral Home in Carroll with Fr. Brian Feller officiating. A public visitation will be held from 4-7 p.m. on Tuesday at the Sharp Funeral Home in Carroll. In lieu of flowers memorials may be left at the funeral home for Kindred Hospice or the ALS Foundation. Funeral arrangements are under the direction of the Sharp Funeral Home in Carroll and online condolences may be left for Clete's family at www.sharpfuneral.com. Born on August 13, 1941 in Carroll, Iowa, Cletus was the son of John A. and Beatrice (Wittrock) Behrens. He was raised on a farm near Roselle, attended Holy Angels School and later graduated from Kuemper Catholic High School. On September 1, 1962, Clete was united in marriage to Sandra Lang at Sacred Heart Catholic Church in Templeton. Following their marriage the couple made their home in Carroll where he worked for Great Plains Gas and later was employed with Farmland Foods until his retirement. In retirement Clete drove school bus for Kuemper and Carroll Community Schools and also worked at Walmart. In his younger years Clete was an avid fast pitch softball player in which he played for over 20 years. He enjoyed traveling with his wife Sandy, playing golf, and taking trips to the casino. Survivors include his children: Brian Behrens and friend Lori of Richardson, TX, Scott Behrens of Westminster, CO, Becky (Kurt) Baumhover of Carroll, Russell (Nicole) Behrens of Grinnell, Curtis Behrens of North English, and Chad Behrens and friend Nikki of Panora; 11 grandchildren; 2 great-grandchildren; his siblings: Kathy (Walt) Grote of Wall Lake, Aggie (Jim) Kitt of Dedham, Gary (Sue) Behrens of Arnolds Park, Wayne Behrens of Denison, Daryl (Lynne) Behrens of Muscatine, Nancy (Paul) Reiling of Lake View, John E. (Lois) Behrens of Carroll, and Artie (Brenda) Behrens of Maquoketa; as well aunts, uncles, nieces, nephews, and other extended relatives. Clete was preceded in death by his wife Sandy in 2011; his parents, John A. and Beatrice Behrens; his brother, Jerry Behrens; his nephew, John Behrens; his sisters-in-law and brother-in-law: June Behrens and Gail (Don) Staples.

The family of Cletus Behrens created this Life Tributes page to make it easy to share your memories.