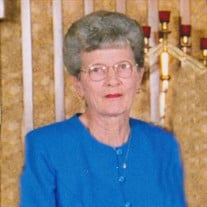 Clarise Pudenz, age 85, of Carroll died Thursday, August 3, 2017, at St. Anthony Nursing Home in Carroll. Mass of the Christian Burial will be celebrated at 10:30 a.m. Monday, August 7, 2017 at Our Lady of Mt. Carmel Catholic Church in Mt. Carmel. The celebrant will be Fr. Lynn Bruch. Con-Celebrant will be Fr. Steve Brodersen. Music will be by the Our Lady of Mt. Carmel Choir. Mass servers will be Grant Borkowski and Isaac Evans. Lectors will be Mitchell Borkowski, and Emily Cockrum. Gift Bearers will be Aaron Nieland, Adam Nieland, Emily Cockrum, and Chandler Pudenz. Eucharistic Ministers will be Marie Baumhover, and Arlene Wittrock. Casket Bearers will be Aaron Nieland, Adam Nieland, Chandler Pudenz, Reggie Freese, Chris Cockrum, and Noah Borkowski. Burial will be in the parish cemetery. Friends may call at the Sharp Funeral Home in Carroll after 3 p.m. on Sunday where there will be a Rosary prayed at 4 p.m., and a Christian Wake Service will be held at 6 p.m. Memorials may be left at the funeral home or at the church to be directed to St. Anthony Hospital, Nursing Home, and Hospice. Funeral arrangements are under the direction of the Sharp Funeral Home and online condolences may be left for Clarise’s family at www.sharpfuneral.com. Clarise was born on June 4, 1932 in Carroll County Iowa; the daughter of Joseph and Elizabeth (Berger) Ortner. She grew up near Mt. Carmel, and graduated from Our Lady of Mt. Carmel High School in 1950. After high school Clarise was employed at Carroll County State Bank. On November 15, 1958 Clarise was united in marriage to Wilbur Pudenz at Our Lady of Mt. Carmel Catholic Church in Mt. Carmel. The couple lived north of Carroll, where Wilbur farmed, with the support of Clarise. Clarise enjoyed working outdoors with gardening, yard work, playing cards, baking, needlepoint, and feeding the birds, and the squirrels. Most of all Clarise enjoyed the time she spent with her family. Clarise was very devoted to her faith, and Our Lady of Mt. Carmel Parish. She served as a guild officer, member of the parish council, and helped with various jobs in the church including taking care of the flowers, and plants. Clarise is survived by her children: Denise (Brian) Nieland of Breda, Tim (Peg) Pudenz of Carroll, and John (Terry) Pudenz of Gilbert, AZ; grandchildren: Aaron (Alyce) Nieland, Adam Nieland, Emily (Chris) Cockrum, Chandler Pudenz, Reggie Freese, and Samantha Freese; five great-grandchildren: Aisha Nieland, Will Nieland, Ellie Nieland, Caden Cockrum, and Elsie Cockrum; four sisters: Sylvia Onken of Pocahontas, Marilyn Wuebker of Carroll, Jane (Don) Drees of Carroll, Leota (Melvin) Borkowski of Carroll; sisters-in-laws: Marilyn Ortner of Pittsville, WI, Wilma Boes of Carroll, Edna Knobbe of Rose Creek, MN, Rita (John) Hoebing of Columbus, NE, Bernice Pudenz of Carroll, and Jean Pudenz of Des Moines; her brothers-in-law: Richard (Bea) Pudenz of Carroll, and Jim (Mary Ann) Pudenz of Carroll; as well as numerous nieces, nephews, and other extended relatives. Clarise was preceded in death by her husband Wilbur on April 21, 2008, her parents, and her brother Justin Ortner.

The family of Clarise Pudenz created this Life Tributes page to make it easy to share your memories.