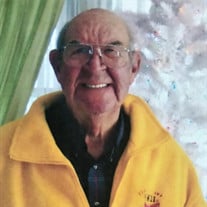 Clarence J. Menke (Curly), celebrated his 95th birthday in December in Arizona with his family. He passed away on February 2, 2017 with a fervent love for God, his family and life. A funeral mass will be held at St. Lawrence Catholic Church in Carroll on Friday, May 26th, at 11:00 A.M. The Celebrant will be Fr. Craig Collison. Music will be by Kate Cuddy, Sherry Loughran, Mike Pipich and the St. Lawrence Choir. Lectors for the funeral mass will be, John Pollpeter and John Darveaux. Gift Bearers will be: Jill Roberts, Brian Roberts, Stella Roberts, Addison Roberts and Kevin Pipich. Eucharistic Ministers will be: Rita Allen, Jane Pipich, and Lyn Stuntz. Honorary casket bearers will be: Ryan Potthoff, Neil Dentlinger, Pete Potthoff, Adam Pipich, Larry Pollpeter, John Pollpeter, and Dennis Menke. Burial will be in Mt. Olivet Cemetery in Carroll with military honors conducted by the Carroll American Legion. Curly’s family will greet friends one hour prior to the mass and also invite friends and family to join them for a luncheon following the burial in the St. Lawrence Parish Collison Hall. Funeral arrangements are under the direction of the Sharp Funeral Home in Carroll and online condolences may be left for Curly’s family at www.sharpfuneral.com. Clarence was a one of a kind personality who worked hard and laughed often. On December 16, 1921, he was born in Pilot Grove, Iowa to Al and Rose (Dingman) Menke at a whopping 11.5 lbs. He graduated from St. Mary’s Catholic School in West Point, Iowa. To help make ends meet during the great depression, as an industrious “curly”-haired boy, he milked cows, delivered milk and papers, raised honey bees and pigeons, worked at an oil station, helped his dad wire houses, and lent a hand on his grandpa’s farm. As an 18-year-old, he worked as a carpenter in the Burlington, Iowa ordnance (ammunitions) plant and was drafted into the army. He went to Officer’s Candidate School and was appointed 2nd Lt. in Field Artillery. He attained rank of Captain after leading a company of 230 men onto Omaha Beach, Normandy, on June 7, 1944 (D-Day+1). He carried a letter from General Eisenhower that gave him instructions to communicate to the battalion. After being discharged from the army, Curly earned an electrical engineering degree in three and one-half years from Iowa State University. Upon graduation, he began his 37-year career at Iowa Public Service/Mid America as an electrical engineer and retired as the company’s Southwest District Operations Manager. . Louise H. Fraune of Ft. Madison, Iowa first met Curly when he was juggling oranges and telling jokes at the local dance hall. September 6, 1947 was the beginning of their festive 61-year marriage. Their ventures included numerous social gatherings, a large number of lively family reunions and weddings in the West Point/ Ft. Madison area, and exciting journeys to a variety of states as well as to Europe, including a Rome tour with 3rd cousin Bishop Maurice Dingman. Curly enjoyed playing an enthusiastic game of bridge or euchre, hunting with his favorite dog, fishing with family, cruising his golf cart down the street to play his usual rounds of golf, and frequently touring Swan Lake to see the local wildlife. He also loved working on daily crossword puzzles, watching his beloved St Louis Cardinals, cheering (and yelling) the Cubs to victory, puttering around the yard, or fixing something using his creative knack for engineering. Curly was an active member of the Chamber of Commerce, Lions, Rotary, VFW, American Legion and Knights of Columbus. He was president and founder of Audubon Industrial Development Corp., and designer and founder of the Audubon County Greenbrier Club. Curly is survived by his three daughters and sons-in-law: Janet Darveaux of Scottsdale, AZ; Joan and Pete Potthoff of Glendale, AZ; Jane and Mike Pipich of Highlands Ranch, CO; and Neil Dentlinger of Maple Grove, MN. He dearly loved his grandchildren: John Darveaux of Scottsdale, AZ; Jill (Potthoff) Roberts and her husband, Brian, of Scottsdale, AZ; Ryan Potthoff and his wife, Sunghiun, of NY, NY; Adam Pipich and Kevin Pipich of Highlands Ranch, CO. His great-granddaughters, Stella and Addison Roberts, always brought a twinkle to his eye and put a smile on his face. Many fond memories were shared with his surviving brother, Ralph Menke, and wife, Lucille; sisters-in-law: Dorothy Menke and Helen Loving; and in-laws, Robert and Rosie Fraune. He was preceded in death by his beloved family: his loving wife, Louise; son, Ron; and daughter, Karen (Menke) Dentlinger; his parents; 2 brothers: Linus Menke and Richard Menke; 4 sisters: Mary Louise Fedler, Margaret Pollpeter, Sr. Rose Menke, Imelda Eckermann; 7 sisters-in-law; and 9 brothers-in-law. Curly was a loving husband, father, father-in-law, grandfather, great-grandfather, brother, uncle, and fun-loving character who had a great wit about him as well as a comedic answer for nearly everything in life. He had the ability to entertain people and to be entertained by others just as often. He is dearly loved and is greatly missed.

Clarence J. Menke (Curly), celebrated his 95th birthday in December in Arizona with his family. He passed away on February 2, 2017 with a fervent love for God, his family and life. A funeral mass will be held at St. Lawrence Catholic Church... View Obituary & Service Information

The family of Clarence "Curly" Menke created this Life Tributes page to make it easy to share your memories.

Send flowers to the Menke family.