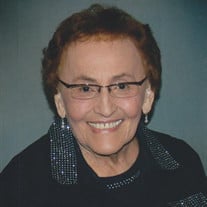 Clara “Bonnie” Langel, 89 of Carroll, and formerly of Templeton, died Sunday, April 9, 2017 at St. Anthony Regional Hospital in Carroll. Mass of the Christian Burial will be celebrated at 10:30 a.m. Wednesday, April 12, 2017 at Sacred Heart Catholic Church in Templeton. The Celebrant will be Fr. Steven Brodersen. Music will be by Jeanne Kerkhoff and the Sacred Heart Men’s Choir. Mass servers will be Julia Mikkelsen, Summer Mikkelsen, and Grant Nielsen. Lectors for the funeral mass will be Laurie Mikkelsen and Jennifer Foland. Gift Bearers will be: Ron Langel, Donna Huffman, Joyce “Joey” Langel. Eucharistic Ministers will be: Shirley Tomka, Judy Mayer, and Dale Schlichte. Honorary Casket Bearers will be Bonnie’s granddaughters. Casket Bearers will be Bonnie’s grandsons: Curt Langel, Troy Langel, Gary Bogdan, Scott Olberding, Joe Tomka, Mike Tomka, Jeff Vonnahme, Jason Schechinger, Riley Rafferty, Adam Rafferty, and Lance Mikkelsen. The Carroll Catholic Daughters of the Americas will form an honor guard for the funeral mass. Burial will be in Sacred Heart Cemetery in Templeton. Friends may call at the Sharp Funeral Home in Carroll after 4 p.m. on Tuesday where there will be a rosary by the Carroll Catholic Daughters of the Americas at 5 p.m., followed by a Christian Wake Service at 7 p.m. The casket will be moved to Sacred Heart Church in Templeton on Wednesday morning where visitation will resume at 9:30 a.m. and will continue until time of the funeral mass. Funeral arrangements are under the direction of the Sharp Funeral Home in Carroll and online condolences may be left for Bonnie’s family at www.sharpfuneral.com. Born on July 1, 1927, at Roselle, Iowa, Clara “Bonnie” was the daughter of Bernard and Amelia (Miller) Riesberg. She attended Holy Angels School in Roselle. On June 15, 1948, she was married to Ted Langel of Templeton at Holy Angels Catholic Church in Roselle by Fr. Bernard Montag. Following marriage, the couple purchased a farm southwest of Templeton where they made their home and raised their family for 52 years. Bonnie was a member of Holy Spirit Parish in Carroll, and was a former 52-year member of Sacred Heart Parish in Templeton. Bonnie served as a past Grand Regent of the Templeton Catholic Daughters of the Americas. She won various diocesan and state awards, and even represented Iowa at two National Catholic Daughters of the Americas Conventions. Bonnie and Ted enjoyed traveling and visited all 50 states and overseas. Bonnie enjoyed entertaining at local centennial parades-where she was well known for being on the floats for the band playing the accordion. Ted and Bonnie treasured dancing at nursing homes, hospitals, and senior centers in a 60-mile radius of Carroll. They were crowned Prince and Princess of Red & White Polka Klub of Iowa in 1990-1991. Bonnie cherished the farm life, helping right alongside Ted and Ron. She also liked gardening, playing organ, accordion, piano, and was an accomplished seamstress. Survivors include her children: Ron Langel (friend, Linda Sowers) of Ankeny, Patricia Langel of Carroll, Donna (Jim) Huffman of Omaha, NE, Joyce “Joey” Langel of Urbandale, Shirley (Vic) Tomka of Carroll, Carol Jean Seddon (friend, Delbert Thurman) of Atlantic, Diane (Steve) Otto of Westminster, CO, Kathy (Dale) Schechinger of Manilla, and Laurie (Mark) Mikkelsen of Dedham; 30 grandchildren; 41 great-grandchildren; her sister: Hilda Heider of Humboldt; sisters-in-law: Margaret Murray of Carroll, and Viola Langel of Carroll; as well as many nieces, nephews, and other extended relatives. Bonnie was preceded in death by her husband Ted in 2003; son, Robert Langel at age one; her parents; her sisters: Irene Riesberg, Laura Hoffman, and Ella Weitl; her brothers: William Riesberg, Herbert Riesberg, Edmund Riesberg, and Albert Riesberg in infancy.

The family of Clara "Bonnie" Langel created this Life Tributes page to make it easy to share your memories.

Clara “Bonnie” Langel, 89 of Carroll, and formerly of Templeton,...