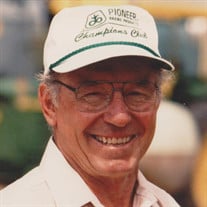 Clair Bernard Snyder, age 91, of Breda died Tuesday, February 1, 2022. Visitation will be held from 1-3 p.m. on Saturday, February 5, 2022 at St. Bernard’s Catholic Church in Breda. Face coverings are required for those in attendance. A private family Funeral Mass will be held at St. Bernard’s Church with burial in St. Bernard’s Cemetery in Breda. Military honors will be conducted by the Breda American Legion. In lieu of flowers, the Snyder family asks that donations be made to St. Bernard’s Church through https://www.kuemper.org/donate. When making a donation, please specify in the comment section that the donation is being made in memory of Clair Snyder to St. Bernard’s Church. Funeral arrangements are under the guidance of the Sharp Funeral Home in Breda and online condolences may be left for Clair’s family at www.sharpfuneral.com. Clair was born October 2, 1930 in Breda, Iowa to Anna (Grote) and Cyril Snyder. He attended country school, starting first grade at age 4, and St. Bernard Catholic School, graduating high school in 1947. He worked on the family farm with a purebred Duroc hog business until drafted into the Army in 1952. After basic training at Ft. Knox, he was deployed to Korea, and served as a tank operator with the 223rd Regiment of the 40th Infantry Division in the Heartbreak Ridge combat area from August of 1952 to July 1953. He received his honorable discharge at Camp Carson, Colorado. After service Clair attended the Electrical Institute in Des Moines and was employed in highway construction. Clair grew up two miles from the love of his life, Myrna Boes. They dated briefly before he left for Korea, but the real love affair unfolded through the beautiful letters they exchanged while they were half a world apart. They were married on May 17, 1955. In 1956 they began farming in the Manning area where Clair established his Snyder TV & Electrical Business. They returned to the family farm at Breda in 1971. Clair and Myrna had four children, Catherine, Margaret, John, and Rebecca. He was an exceptional role model who taught his children to love reading and knowledge, the importance of hard work, the strength of family and community, and that a sense of humor is essential to live life well. Clair had many professional accomplishments. He was a seed salesman and served on the Pioneer Sales Advisory Council. He was also a member of the Carroll County Beef Producers, Pork Producers, Farm Bureau and Legion Post 607 where he held various offices. In 1963 he received the Carroll Jaycees “Outstanding Young Farmer Award.” He spent 6 years on the Iowa Corn Promotion Board and National Feed Grains Council, actively pursuing the establishment of the ethanol industry in Iowa. He also shared his diverse talents in service to his community--contributing his beautiful tenor voice and perfect pitch to church choirs and the Elks Chorus, acting as eucharistic minister and lector for St. Bernard’s Parish, assisting with many church fundraisers, helping write the history of Breda for the Centennial book, running electricity for the stands for Breda July 4th celebrations, and setting off fireworks. Clair retired from farming in 1995. In 1998 he and Myrna built their present home in Breda, doing most of the finish work themselves. After retirement he became an active wood carver and received awards for duck decoys and fish displays. He was an avid outdoorsman and went on African safari twice. Most of all, Clair loved his family and friends, fishing, hunting, golfing, playing Pitch and Euchre, and enjoying winters in Florida at the Lazy River Village. To the delight of his grandchildren, Clair was an inspired storyteller with a sharp wit and a charming smile. In the last year of his life, he told family and friends, “I’ve had a great life—been to the county fair, the state fair, four continents, and even Red’s a few times.” Survived by his wife Myrna Snyder of Breda; his daughters: Catherine (Dan) Pudenz of Lincoln, NE, Margaret Snyder (Michael Mortensen) of Seattle, WA, Rebecca Snyder (Dwight Lawson) of Oklahoma City, OK; 7 grandchildren: Kristen Pudenz (Pablo Maurin), Lauren Pudenz, Alex Pudenz, Max Mortenson, Drew Mortenson Sam Snyder, and Rory Lawson; 1 Great grandchild, Eleanor Maurin Pudenz; his brother, Julius Snyder; his in-laws: Janice Snyder, Duane Boes, Dennis (Jan) Boes, Ardel (Mary) Boes, Fr. Clair Boes, Eldon (Joan) Boes, Carol Malone, Merlin (Connie) Boes, and Susan (Dennis) Schreier; as well as many nieces, nephews, other extended relatives and many friends. Clair was preceded in death by his parents, Cyril & Anna (Grote) Snyder; his son, John Snyder; and his siblings, Vera Kennebeck, Elaine Wiese, Kenneth Snyder.

The family of Clair Snyder created this Life Tributes page to make it easy to share your memories.