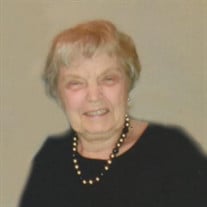 Charlene Bohling, age 81, of Richardson, Texas and formerly of Carroll, Iowa died Sunday, May 30, 2021 at Country House Nursing Home in Omaha. A Funeral Service will be held at 10:30 a.m. Saturday, June 5, 2021 at Sharp Funeral Home in Carroll. The officiant will be Fr. Kevin Richter of St. John Paul II Parish in Carroll. Readers will be John Frank and Mike Frank. Casket bearers will be Charlene’s Family. Burial will be in Mt. Olivet Cemetery in Carroll. Visitation will be held from 9:30 a.m. until 10:15 a.m. Saturday at the funeral home. Funeral arrangements are under the guidance of the Sharp Funeral Home in Carroll, and online condolences may be left for Charlene’s family at www.sharpfuneral.com. Charlene, the daughter of John and Martha (Middendorf) Frank was born on October 13, 1939 at Carroll, Iowa. She grew up in Carroll, and graduated from Kuemper Catholic High School in 1957. On April 23, 1960 Charlene was united in marriage to Frederick Bohling at St. Lawrence Catholic Church in Carroll. The couple moved to Richardson, Texas. While in Texas, Charlene graduated from Dallas Community College. She began working for the Richardson Independent School District and continued her employment there for over 20 years. Charlene enjoyed traveling especially with her sisters. Most of all Charlene enjoyed spending time with her three grandsons. Charlene is survived by her sons: Timothy Bohling, and Todd Bohling; grandsons: Alex Bohling, Andy Bohling, and Anthony Bohling all of Richardson, Texas; siblings: Judy (Dan) Benjamin of Omaha, Terry (June) Frank of Hillsboro, OR, Mary (Bob) Berger of Cherokee, John (Sue) Frank of Zion, IL, Barb (Gary) Brauckman of Glidden, Mike (Robbie) Frank of Omaha, and Geri (Gary) Rohner of Omaha, sisters-in-law: Mary Kay (Joe) Sporrer of Dedham, and Ruth (Pat) Lubischer of Roland Park, KS; as well as many nieces, nephews, and other extended relatives. Charlene was preceded in death by her husband Frederick in 1994; daughter: Tricia Limbaugh in 1998; her parents: John and Martha Frank; and a brother-in-law: Bill (Joyce) Bohling.

The family of Charlene Bohling created this Life Tributes page to make it easy to share your memories.

Charlene Bohling, age 81, of Richardson, Texas and formerly of...

Send flowers to the Bohling family.