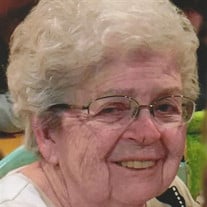 Carolyn Badding, age 83, of Carroll, formerly of Arcadia, died Friday, February 9, 2018 at Regency Park Nursing Home in Carroll. Mass of the Christian Burial will be celebrated at 10:30 a.m. Friday, February 16, 2018 at St. John’s Catholic Church in Arcadia. Burial will be in the parish cemetery. The celebrant will be Fr. Mark Stoll. Con-Celebrant will be Fr. Richard Remmes. Music will be by Sharon Bierl and the St. John’s Choir. Lectors will be Carolyn’s granddaughters. Gift Bearers will be Carolyn’s granddaughters. Casket Bearers will be Carolyn’s grandsons, and nephews: Dan Badding and Jim Berning. The Carroll Catholic Daughters of the America’s and the Arcadia American Legion Auxiliary will form an honor guard for the funeral mass. Friends may call at the Sharp Funeral Home in Carroll after 4 p.m. on Thursday, where there will be a Carroll Catholic Daughters of the Americas Rosary at 5 p.m., and a Christian Wake Service will be held at 7 p.m. Visitation will resume at the funeral home on Friday morning from 9-945 a.m. Funeral arrangements are under the direction of the Sharp Funeral Home in Carroll, and online condolences may be left for Carolyn’s family at www.sharpfuneral.com. Born on January 5, 1935 at Carroll, Iowa, Carolyn was the daughter of Paul and Margaret (Harrison) Bachman. She grew up in Carroll, and graduated from St. Angela’s Academy. On September 12, 1953 Carolyn was united in marriage to Donald Badding at St. Joseph’s Catholic Church in Carroll. The couple lived near Arcadia before 1972, when they purchased the Badding Family Farm southeast of Arcadia. This is where the couple made their home, and operated their grain and livestock farming operation. In addition to helping with the many tasks on the farm Carolyn was a devoted homemaker. In her later years she worked part time at Wal Mart in Carroll. Carolyn enjoyed crafts, painting, playing cards, puzzles and bowling with Don in her younger years. She was an active member of the Arcadia community, St. John’s Parish, St. John’s Christian Mothers, the Arcadia American Legion Auxiliary, and the Carroll Catholic Daughters of the Americas. Left to celebrate Carolyn’s life are her children: Denice Badding of Sioux City, Diane (Jerry) Nepple of Carroll, Donna (Vince) Badding-Fleener of Carroll, Doris Badding of Arcadia, Deb (Howard) Koster of Carroll, and Paul (Linda) Badding of Solomon, KS; grandchildren: Stephanie Kramer, Nichole Poncy, Sam Daniel, Michaela Daniel, Nathan Nepple, Nicholas Nepple, Brooke Fleener, Austin Fleener, Jennie Noah, Mike Andersen, Kenzie Wycoff, Amanda Badding, Allison Badding, and Cody Badding, 6 great-grandchildren; her sisters-in-law, and brothers-in-law: Mary Jo (Pete) Berning of Arcadia, Rosie (Lon) Diers of Carroll, Kathy (Elmer) Bedford of Carroll, Janet Badding of Elkhart, Indiana, Bill (Mardy) Badding of Carroll, Joni Badding of Carroll, and Surge Badding of Carroll; as well as many nieces, nephews, and other extended relatives. Carolyn was preceded in death by her parents, husband Don on August 24, 2008, their infant son Michael; her brothers-in-law: Jack Badding in Infancy, Joe Badding, and Bob Badding; and her parents-in-law: William and Rose (Schroeder) Badding.

The family of Carolyn Badding created this Life Tributes page to make it easy to share your memories.

Send flowers to the Badding family.