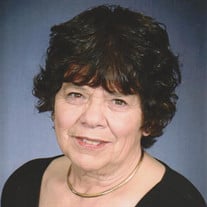 Camela Neumann, 64 of Carroll, died early Thursday morning, February 9, 2017, at her home in Carroll. Mass of the Christian Burial will be celebrated at 10:30 a.m. Tuesday, February 14, 2017 at St. Lawrence Catholic Church in Carroll. The Celebrant will be Fr. Brian Feller. Con-Celebrant will be Fr. Craig Collison. Music will be by Kate Cuddy and the St. Lawrence Choir. Lectors for the funeral mass will be Brandon Nepper and Aaron Nepper. Gift Bearers will be Camela’s grandchildren. Eucharistic Ministers will be Clay and Diane Gubbels. Casket Bearers will be: Troy Davis, Ted Henrich, Ken Hurley, John Schlie, Gerald Spanjer, John Snyder, Jim Bender, and Silvester Davis. Burial will be in the Carroll City Cemetery. Friends may call at the Sharp Funeral Home in Carroll after 5 p.m. on Monday where there will be a Christian Wake Service at 7 p.m. The casket will be moved to St. Lawrence Church on Tuesday morning where visitation will resume at 9:30 and continue until time of the funeral mass. Funeral arrangements are under the direction of the Sharp Funeral Home in Carroll and online condolences may be left for Camela’s family at www.sharpfuneral.com. Born on April 18, 1952 at Carroll, Iowa, Camela was the daughter of Tom and Dorothy (Buehler) Breon. She spent her younger years in the Odebolt area and later graduated from Odebolt-Arthur High School with the Class of 1970. On June 19, 1970, she was united in marriage with Dick Neumann at Sacred Heart Catholic Church in Ida Grove. Dick and Camie remained in the Odebolt area following their marriage and later moved to the Carroll Community where they enjoyed one another’s companionship for the remainder of their nearly 47 years of marriage. She was employed for many years at Bil Mar Foods in Storm Lake and then Pella Corporation in Carroll where she recently retired from. Camie loved camping, sitting around the campfire, and also enjoyed cooking. In recent years she spent time traveling with her husband; the love of her life, to the south during the Iowa winter months. Her greatest joy was spending time with her family, especially her grandchildren. Camela was a member of St. Lawrence Church in Carroll. Survivors include her husband Dick Neumann of Carroll; her children: Chad Neumann and special friend Ann of Carroll, Travis Neumann and his wife Sara of Carroll, and Shannon Neumann of Carroll; her grandchildren: Ashley Neumann, Taylor Neumann, Devin Behrendsen, Caden Neumann, Cheyann Neumann, Kaia Neumann, Mitchell Neumann, Paxton Neumann, and Riley Coats; her brother, Duane (Mary) Breon of Boyer; as well as other extended relatives and many friends. Camela was preceded in death by her parents, Tom and Dorothy Breon; and her sisters: Pamela Breon and Janice Richardson.

Camela Neumann, 64 of Carroll, died early Thursday morning, February 9, 2017, at her home in Carroll. Mass of the Christian Burial will be celebrated at 10:30 a.m. Tuesday, February 14, 2017 at St. Lawrence Catholic Church in Carroll. The... View Obituary & Service Information

The family of Camela Neumann created this Life Tributes page to make it easy to share your memories.

Send flowers to the Neumann family.