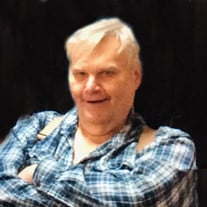 Bruce Heim, age 62, of Pocahontas, died Friday, June 7, 2019 at his home in Pocahontas. A funeral service will be held at 11 a.m. on Friday, June 14, 2019 at the Sharp Funeral Home in Breda. Burial will be in St. Bernard’s Cemetery in Breda. Visitation will be begin at 10 a.m. and continue until the time of the service. Funeral arrangements are under the guidance of the Sharp Funeral Home in Breda, and online condolences may be left for Bruce’s family at www.sharpfuneral.com. Bruce, the son of Marvin and Esther (Koster) Heim was born on August 8, 1956 at Carroll, Iowa. He grew up north of Breda, and attended St. Bernard’s School, and later Wall Lake High School. After his formal education, Bruce worked for an area farmer, Paul and Wayne’s in Carroll, and later Nobles in Sac City. During his early 20’s Bruce struggled with his mental health. He would later become a resident at Genesis Development in Pocahontas where he worked several jobs in the community. Bruce, and his family appreciated the purpose and the opportunities that Genesis provided for him. In his early years, Bruce enjoyed riding his motorcycle. He also enjoyed traveling, spending time with kids, especially his nieces and nephews. He always enjoyed being around people, and pleasing people. Left to celebrate Bruce’s life is his mother: Esther Heim of Lake City; siblings: Larry Heim, and his wife Vicki of Glidden; Richard Heim, and his wife Melody of Auburn, and Mary Tonsfeldt, and her husband Paul of Grand Junction, as well as his nieces, nephews, and many friends. Preceding Bruce in death are his father; Marvin Heim in 1982, and his paternal, and maternal grandparents.

The family of Bruce Heim created this Life Tributes page to make it easy to share your memories.

Send flowers to the Heim family.