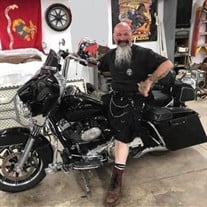 Brett Eischeid, 49 of Lidderdale, died Friday, September, 6, 2019 at the University of Iowa Hospital in Iowa City, Iowa. Visitation will be held from 4-7 p.m. on Wednesday, September 11, 2019 in the Halbur Gymnasium. Per family’s request, please dress casual. At 7:30 p.m., Military Honors will be given by the Arcadia American Legion. In lieu of flowers, memorials may be directed to the Brett Eischeid Memorial Fund. Funeral arrangements are under the guidance of the Sharp Funeral Home in Carroll and online condolences may be left at www.sharpfuneral.com. Born on April 17, 1970 at Carroll, Iowa, Brett was the son on Donald and Jane (Espenhover) Eischeid. He grew up in Halbur and later graduated from Carroll High School. Following his schooling Brett served in the United States Marine Corps from 1988-1992. After his honorable discharge he moved to Montana where he held various job positions including working in the oil fields. Brett then returned to Halbur where he worked for his father’s business, Don’s Construction. Following the passing of his dad in 2014 the business transitioned into Hog Barn Repair and Maintenance which Brett owned and operated until his sudden passing. Brett was a motorcycle enthusiast and enjoyed riding his Harley as well as repairing motorcycles. He loved socializing and entertaining his family and his many friends. Brett also loved spending time with his dog, Katrina. Brett was a member of the Arcadia American Legion. Brett is survived by his mother, Jane Eischeid of Halbur; his brother, Brad “Goob” Eischeid and his wife Jessica of Carroll; his daughter, Dakota; his nieces and nephews: Shawna Eischeid and friend Salomon, Brandi Eischeid, and Trent Eischeid; as well as his aunts, uncles, and cousins from the Eischeid and Espenhover families; and his many friends. His father, Donald Eischeid preceded him in death.

Brett Eischeid, 49 of Lidderdale, died Friday, September, 6, 2019 at the University of Iowa Hospital in Iowa City, Iowa. Visitation will be held from 4-7 p.m. on Wednesday, September 11, 2019 in the Halbur Gymnasium. Per family&#8217;s request,... View Obituary & Service Information

The family of Brett Eischeid created this Life Tributes page to make it easy to share your memories.

Send flowers to the Eischeid family.