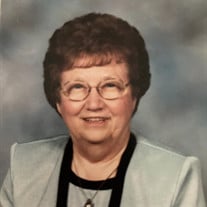 Bernice E. Williams, 92 of Carroll died Thursday, June 2, 2022 at St. Anthony Hospital in Carroll, IA. Mass of the Christian Burial will be celebrated at 10:30am on Tuesday, June 7, 2022 at St. John Paul II Parish – St. Lawrence Church in Carroll. The celebrant for the funeral mass will be Fr. Kevin Richter with music by Kathy Halbur and Kathleen Macke. Her grandson Josh Williams will be lector. Gift bearers will be grandchildren Kacey Cook, Lindsey O’Dell, Holly Smith, Jenny Schreck, Susie Elliot and Allison Szurek. Casket bearers and honorary casket bearers will be grandchildren Mike Williams, Kyle Williams, Jeff Williams, Joel Williams, Jason Williams, Matt Seidl, Mark Seidl, Nick Seidl, Andy Schreck, Brian Schreck, Ryan Williams, Eric Williams and Adam Williams. Burial will be at 1:30 p.m. in Holy Angels Cemetery, Roselle, IA. The Carroll Catholic Daughters of the America’s will form an Honor Guard for the funeral mass. Visitation will be held from 5:00pm to 7:00pm on Monday at Sharp Funeral Home in Carroll. There will be a Christian Wake Service at 7:00pm. Additional visitation will be from 9:30-10:15am Tuesday at the church. In lieu of flowers memorials may be left at the funeral home or the church. Funeral arrangements are under the guidance of the Sharp Funeral Home in Carroll. Online condolences may be left for Bernice’s family at www.sharpfuneral.com Bernice, the daughter of Ben and Caroline (Sander) Leiting of Arcadia was born on September 2, 1929. She grew up on the family farm a mile south of Arcadia. She graduated from St. John’s High School as the valedictorian. Her first job was with the ASCS office in Carroll. She married Virgil E. Williams February 7, 1950, and began her family in Roselle, IA. Virgil and Bernice purchased the Roselle Tavern in 1957. Bernice was elected the Carroll County Treasurer and held that office for over 30 years before retiring in 1997, only a few months after Virgil’s death. She wanted to make sure that Roselle had a gathering place, so she kept the tavern open and operated it for an additional 17 years before moving to Carroll. For the next six years she also enjoyed working part-time as clerk for Seidl Auction Service. Bernice loved her family and was surprised by them with a party on her 90th birthday. Her cookies, cinnamon rolls, blueberry/rhubarb jam, chocolate zucchini cake, pies and malts at bedtime will be deeply missed. She loved listening to birds, especially Cardinals and Wrens. Her skills at playing cards made her a chosen partner. She put many 1,000-piece jigsaw puzzles together and was an avid reader. Bernice belonged to Holy Angels Parish in Roselle before moving to Carroll when she joined St. Lawrence Parish. She was a long-time member of the Catholic Daughters and was a volunteer with the Retired Senior Volunteer Program. Over the years she donated many gallons of blood. Left to celebrate her life are her children Glenn (Kathy) Williams, Geneseo, IL, Jim (Julie) Williams, Carroll, Sue (Steve) Seidl, Dedham, Gayle Schreck (Clay Smith), Urbandale, and Jon (Joyce) Williams, Urbandale, as well as 20 grandchildren and 41 great-grandchildren. Bernice was preceded in death by her husband Virgil, son-in-law John Schreck, her parents, six brothers, Harold, Alvin, Vince, Dennis, Ronald, Loren, and sister Lucille.

The family of Bernice Williams created this Life Tributes page to make it easy to share your memories.

Send flowers to the Williams family.