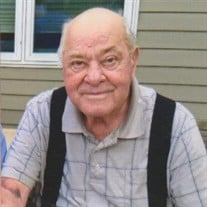 Bernard Irlbeck (Sonny), age 89 of Templeton, died Wednesday, September 23, 2020 at Journey Senior Services in Carroll. Mass of the Christian Burial will be celebrated at 10:30 a.m. Monday, September 28, 2020 at Sacred Heart Catholic Church in Templeton. The celebrant will be Fr. Steve Brodersen. Music will be by Jeanne Kerkhoff. Soloist will be JoAnn Beane. Lectors will be Dave Ramsey and Deb Hansen. Eucharistic Minister will be Joea Kemper. Honorary Casketbearers will be Nicole Behrens, Andrew Irlbeck, Hannah Irlbeck, Ethan Irlbeck, Jesi Wiltse, Stephanie Hein, Chase Musick, Lindy Thomas, Amanda Grey, Emily Mosman, Samantha Duane, Matt Wiltse, Lauren Irlbeck, Amanda Gaskin, Christina Haggerty, and Brook Wiebers. Casketbearers will be Bret Wiltse, Jason Wiltse, Jake Behrens, Alex Irlbeck, Dalton Hawbaker, and Jesse Janssen. Burial will be in the parish cemetery with military honors conducted by the Dedham American Legion. There will be no public visitation at the church prior to the funeral mass on Monday morning. Those in attendance will be required to wear a mask. Visitation will be held from 3 to 5 p.m. on Sunday at the Sharp Funeral Home in Carroll. Those in attendance are required to wear a mask, and abide by all COVID-19 Guidelines. Funeral arrangements are under the guidance of the Sharp Funeral Home in Carroll, and online condolences may be left for Sonny’s family at www.sharpfuneral.com. Bernard, the son of Alphonse and Margaret (Underberg) Irlbeck, was born on March 4, 1931 on a farm near Templeton, Iowa. The oldest of ten siblings he attended country school, and later attended school in Dedham. He helped with farming, corn shelling, trucking, and later worked for Pape Implement. In July 1952 he was drafted into service of his country, and was honorably discharged in July of 1954. On August 3, 1954 he was married to Helen Schwabe at St. Bernard’s Catholic Church in Breda. Sonny returned to work at Pape Implement and the couple lived in Templeton. In 1957 the couple moved to Westside, and began farming. They later moved to Vail and the Deloit area. In 1969 they returned to a farm near Templeton. The couple lived there raising their family of 8 children until 1995 when they moved to their home in Templeton. Over the years Sonny farmed as well as operated a custom corn sheller for 35 years. Sonny helped with many community projects, and collected many things. He enjoyed cards, Grumpy’s Garage, and being with his children, grandchildren, and great-grandchildren. He was a member of Sacred Heart Parish, Templeton Knights of Columbus, and the Dedham American Legion. Sonny is survived by his wife Helen of Templeton, and his children: Nancy Irlbeck Musick (Steve) of Moscow, Idaho, Mary Grundmeier (John) of Carroll; Robert Irlbeck (Pam) of Templeton, Lois Behrens (John) Roselle, Kathy Mosman (Donn) of Raymore, Missouri, Duane Irlbeck (Angela) of Templeton, and Glen Irlbeck (Anne) of Templeton; 22 grandchildren; 31 great-grandchildren. Also surviving are his siblings: Jerome, LeRoy (Elaine), Tom (Dawn), Fred (Karen), and Eugene (Mary Jo); sisters-in-law: Marian Irlbeck, and Pat Irlbeck, as well as many nieces, nephews, and other extended relatives. Sonny was preceded in death by his daughter Betty Lou Irlbeck; a grandson Johnny Behrens; his parents, Alphonse and Margaret Irlbeck; brothers: Raymond, John and James; sister: Mary Ann Irlmeier, as well as a sister in infancy; parents-in-law: Ben and Elizabeth Schwabe; brother-in-law: Paul Schwabe, and sister-in-law: Marie Schumacher.

The family of Bernard "Sonny" Irlbeck created this Life Tributes page to make it easy to share your memories.