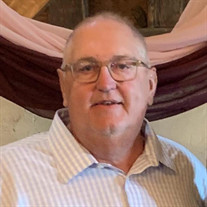 Ben Eugene Miller, 61 of Corning, passed away Friday April 15, 2022, with his wife by his side. Funeral services will be held at 10 a.m., Thursday, April 21, 2022 at the Sharp Funeral Home in Carroll. Officiating will be Peg Scheidt. Casket Bearers will be: Tom Anderson, Dean Anderson, Bob Bauer, Tyler Edwards, Jeff Krill, and David Green. Honorary Casket Bearers will be: Dustin Oaks, Devon Bauer, Dakota Bauer, Sarah Rewoldt, Emily Reed, and Rick McManis. Burial will be in the Carroll City Cemtery. Visitation will be held from 4-7 p.m. on Wednesday at the Sharp Funeral Home in Carroll. Funeral arrangements are under the guidance of the Sharp Funeral Home in Carroll and online condolences may be left for Ben's family at www.sharpfuneral.com. Ben was born to Ben Raymond Miller and Mary Lou Miller April 22, 1960, in Des Moines, IA. He spent his childhood on the family dairy farm in Corning, IA, which helped him develop a hard work ethic, a love of nature, and appreciation for family. After graduating from Prescott High School in Prescott, IA, in 1978, Ben worked in the tire business for over 30 years. He was well respected in the commercial tire business and built friendships with many of his customers. Ben was united in marriage with Joan Brown on September 10, 1988, and they made their home in Ankeny, IA for 30 years. Ben had four children (Ann, Genny, Zebulon, and Zackery) whom he loved dearly. He was the kind of dad that was always at the soccer and football games and supported his children no matter what path they decided to take. Ben and Joan built a cabin on his childhood farm ground in 2005. Ben spent many hours there with family and friends fishing and hunting. Ben loved getting his family together to celebrate the Fourth of July and putting on a big firework display every year. He looked forward to hosting an annual Mother’s Day fishing trip at the cabin for the guys. His biggest adventure at the cabin was when he shot a 14-point buck. Ben and Joan loved the cabin so much that they recently built a home on the farm ground and moved from Ankeny. Ben is survived by his wife Joan Miller of Corning; his children: Ann Miller, Genny Miller, Zebulon (Meghan) Miller, Zackery (McKaye) Miller; his grandchildren: Lyndsey Chumbley, Nolan Marshall, Taylah Marshall, Keira Marshall, and Norah Marshall; his mother: Mary Lou Miller; his sisters: Starla (Ron) Sproston, Carmen Morris, Annette Miller; his mother-in-law Janet Brown; his sisters-in-law and brother-in-law: Joe (Shawn) Brown, JoAnn Wright, Jennifer (Bob) Bauer; as well as other extended relatives and friends. Ben was preceded in death by his father Ben Raymond Miller and father-in-law Don Brown; brothers-in-law Paul Morris and Tim Oaks.

Ben Eugene Miller, 61 of Corning, passed away Friday April 15, 2022, with his wife by his side. Funeral services will be held at 10 a.m., Thursday, April 21, 2022 at the Sharp Funeral Home in Carroll. Officiating will be Peg Scheidt. Casket... View Obituary & Service Information

The family of Ben Miller created this Life Tributes page to make it easy to share your memories.

Send flowers to the Miller family.