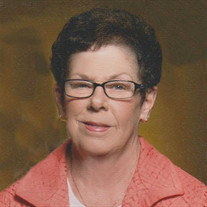 Barbara Masching, 77 of Breda, died early Tuesday morning, November 6, 2018, at the University of Nebraska Medicine Center in Omaha, Nebraska. Mass of the Christian Burial will be celebrated at 10 a.m. Saturday, November 10, 2018 at St. Bernard’s Catholic Church in Breda. The Celebrant will be Fr. Mark Stoll. Con-Celebrants will be Fr. Gary Snyder and Fr. Brian Feller. Mass servers will be: Cole Uhlenkamp, Connor Uhlenkamp and Colin Uhlenkamp. Music will be by Marilyn Hundling and the St. Bernard’s Choir. Lector for the funeral mass will be Michelle Masching. Barb’s grandchildren will present the offertory gifts. Eucharistic Minister will be Jay Masching. Casket Bearers will be: Jeff Schon, Mike Masching, Steve Wieland, Tim Wieland, OJ Ludwig, Greg Pudenz and Jay Masching. The Breda American Legion Auxiliary will form an honor guard for the funeral mass. Burial will be in Mt. Olivet Cemetery in Carroll. Friends may call at St. Bernard’s Church in Breda after 4 p.m. on Friday where there will be a Christian Wake Service held at 7 p.m. Memorials may be left at the church for Kuemper Catholic Schools Foundation. Funeral arrangements are under the direction of the Sharp Funeral Home in Breda and online condolences may be left for Barb’s family at www.sharpfuneral.com. Born on August 12, 1941 at Carroll, Iowa, Barbara was the daughter of Francis Leo “Barney” and Marie (Burns) Sharp. She grew up living in the Sharp Funeral Home in Carroll and attended St. Lawrence Grade School and was a 1960 graduate of Kuemper Catholic High School. On August 24, 1963, Barb was united in marriage to Donald Masching at St. Lawrence Catholic Church in Carroll. Don and Barb lived in Carroll for a brief time until 1965 when they moved to Breda to live in the newly built Sharp Funeral Home. Barb worked in the clerk’s office at the Carroll Courthouse for a brief time and then worked alongside her parents, her husband Don, and Tom Schapman with the Sharp Funeral Home and Sharp’s Florist. In 2008, Don and Barb moved from the funeral home to their new home on the Breda Golf Course. She loved shopping, getting her hair and nails done and her time spent at the Breda Pool. Barb also enjoyed socializing with her family and many friends and being active in her grandchildren’s lives. She was a member of St. Bernard’s Parish, Breda American Legion Auxiliary, Breda Order of Foresters, and the National Catholic Society of Foresters. Barb is survived by her husband Don Masching of Breda; her sons: Bob (Tammi) Masching of Valley, NE, Pat (Michelle) Masching of O’Fallon, IL, Tom “Zip” Masching of Carroll, and Scott (Cindy) Masching of Breda; 10 grandchildren; 3 great-grandchildren; her sisters-in-law and brothers-in-law: Edna Ludwig of Carroll, Lois (Chuck) Neumayer of Carroll, Jim (Joyce) Masching of Carroll, Jim (Mary Ann) Pudenz of Carroll, Paul Wieland of Carroll, Don Wieland of Carroll, and Betty Masching of Carroll; as well as many nieces, nephews, other extended relatives and many friends. Her parents, Barney and Marie Sharp, preceded her in death.

The family of Barbara Masching created this Life Tributes page to make it easy to share your memories.

Send flowers to the Masching family.