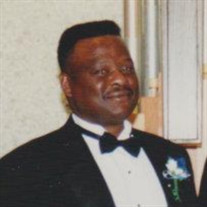 Arthur Lee Smith, 60 of Carroll, Iowa, died peacefully in his sleep on Wednesday, April 15, 2020 at his residence in Carroll. A private family viewing will be held Monday, April 20, 2020 at the Sharp Funeral Home in Carroll. Arthur’s body will be taken to Wynne, Arkansas where he will be laid to rest. Funeral arrangements are under the guidance of the Sharp Funeral Home in Carroll and online condolences may be left for Art’s family at www.sharpfuneral.com. Arthur Lee Smith, son of Ed Louis and Effie Mae (Patrick) Smith, was born in Parkin, Arkansas on February, 18 1960. Arthur was a avid fisherman and a huge New Orleans Saints fan, you could always find him in front of his TV during the season watching his team or rooting for any other team in his division. If you was friends of Arthur you always known him to be representing his team either wearing something or talking about them and arguing with you that they was the best team out there. Arthur spent his earlier years painting where he met the late Nora Kay Wilson to which brought three sons. Nelson/Rita Wilson of Sioux city Iowa, Dale/Kat Wilson Sioux Falls, South Dakota, and Tyree Wilson of Sioux Falls, South Dakota. Arthur moved to Sioux City, Iowa in 1987 where he worked at IBP and then many years at Roadshow Video where he would greet many of his friends with his smile, and strike up a conversation. Arthur than made a career out of truck driving where he would travel to different states. His favorite memory was when he got a load right to the superdome in New Orleans where he got his own private tour. Arthur married Christy Smith of Coon Rapids, Iowa in October of 1996. This union brought Brianna Lee Smith, Carroll, Iowa, Monique Rae Smith, Minneapolis Minnesota, Arthur Lee Smith Jr “AJ”, Carroll, Iowa, Rita Mae Smith Carroll, Iowa and Ashanta Smith Carroll, Iowa Arthur’s favorite pastime was getting together for family gatherings for BBQ’s, cards, dominoes or just spending the day with his grandchildren. Arthur leaves behind five brothers, Ed Louis Smith Jr, Roy lee Smith, Randy Smith, Orlondo Smith Ricky Brown and Tracy Smith and four sisters Diane Brown, Shirley Smith, and Grace Smith. 17 grandkids, 4 great grandkids and many nieces and nephews. Arthur was proceeded in death by a sister Annie Mae Smith, niece Jennifer Brown and his parents.

Arthur Lee Smith, 60 of Carroll, Iowa, died peacefully in his sleep on Wednesday, April 15, 2020 at his residence in Carroll. A private family viewing will be held Monday, April 20, 2020 at the Sharp Funeral Home in Carroll. Arthur&#8217;s... View Obituary & Service Information

The family of Arthur Lee Smith created this Life Tributes page to make it easy to share your memories.

Arthur Lee Smith, 60 of Carroll, Iowa, died peacefully in his...

Send flowers to the Smith family.