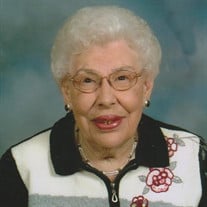 Arlene Hannasch, 99 of Carroll, died Saturday, October 22, 2016 at Hawkeye Care Center in Carroll. Mass of the Christian Burial will be celebrated at 10:30 a.m. Tuesday, October 25, 2016 at St. Lawrence Catholic Church in Carroll. The Celebrant will be Fr. Craig Collison. Music will be by Kate Cuddy, Michele Phillips, and the St. Lawrence Choir. Lector for the funeral mass will be Carol Klocke. Gift Bearers will be Danny Newman and David Newman. Eucharistic Ministers will be Diane Hannasch, Joan Hannasch, and Phil Phillips. Casket Bearers will be: Gary Ford, Leon Green, Bob Overmohle, Louis Overmohle, Leonard Hannasch, and Don Hannasch. Burial will be in Mt. Olivet Cemetery in Carroll. Visitation will begin at 9 a.m. Tuesday at St. Lawrence Church and will continue until time of the funeral mass. Funeral arrangements are under the direction of the Sharp Funeral Home in Carroll and online condolences may be left for Arlene's family at www.sharpfuneral.com. Born on September 6, 1917, near Lidderdale, Iowa, Arlene was the daughter of John and Sophie (Harms) Ford. She attended country school and following her schooling lived with her parents. On October 6, 1942, Arlene was united in marriage to Alfred Hannasch at Sts. Peter and Paul Catholic Church in Carroll. She spent her entire lifetime in the Carroll area and was employed at St. Anthony Hospital as a nurse’s aid, retiring in 1987. Arlene volunteered with the R.S.V.P. group and was also a member of St. Lawrence Parish and Parish Ladies Guild. Survivors include her daughter, Beverly Newman and her husband Mike of Iowa City; her grandsons: David Newman of Iowa City and Danny (Jennifer) Newman of Altoona; her great-grandchildren: Samantha and Cael Newman of Altoona; as well as many nieces, nephews, and other extended relatives. Arlene was preceded in death by her parents; her husband Alfred Hannasch in 1972; her sisters: Gladys Mount and Ruth Feld; and her brothers: Wilbur Ford, Delbert Ford, George Ford, and Ira Ford.

The family of Arlene Hannasch created this Life Tributes page to make it easy to share your memories.

Send flowers to the Hannasch family.