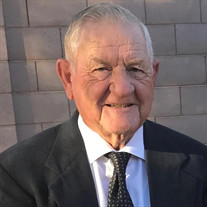 Arden Hinners, age 86, of Carroll, formerly of Halbur, died Saturday, March 27, 2021 at his home surrounded by his family. Mass of the Christian Burial will be celebrated at 10:30 a.m., Wednesday, March 31, 2021 at St. Augustine Catholic Church in Halbur. The Celebrant will be Fr. Kevin Richter. Con-Celebrant will be Fr. Timothy Johnson. Music will be by Julie Sibbel. Lector for the Funeral Mass will be Tom Espenhover. Casket Bearers will be Jared Hoffman, Matthew Rupiper, Matthew Tiojanco, Clayton Hinners, Jacob Fay, and Bradley Carlson. Burial will be in the parish cemetery with Military Honors conducted by the Arcadia American Legion. Visitation will be held from 4-7 p.m. on Tuesday at the Sharp Funeral Home in Carroll. Additional visitation without greeting the family will be held from 9:30-10 a.m. on Wednesday at the church. Those in attendance at both gatherings are required to wear a face covering and abide by current social distancing guidelines. In lieu of flowers, memorials may be left for St. Anthony Hospice or St. Anthony Regional Cancer Center. Funeral arrangements are under the guidance of the Sharp Funeral Home in Carroll and online condolences may be left for the Hinners family at www.sharpfuneral.com. Born on a farm near Westside, Iowa, Arden was the son of Art and Loretta (Trecker) Hinners. SP/4 Arden Hinners entered the United States Army on February 1, 1955. He received his basic training at Fort Sill, Oklahoma. Arden was assigned to Battery “A” 6th Armored Field Artillery Battalion. After his training he became a supply clerk. Arden also spent time at Camp Chaffee, Arkansas where he was a Supply Sergeant until his honorable discharge on February 1, 1957. On April 4, 1959, he was united in marriage to Judy Espenhover. Together they raised 8 children and shared almost 62 years of marriage. Arden was engaged in livestock and grain farming his entire life. He thoroughly loved being in the combine and had a passion for agriculture. He and Judy spent many winters in Arizona, and he loved spending time with his family and supporting his grandchildren’s activities. Arden also liked to golf, socialize, and loved a good card game, especially his Saturday night card club. He enjoyed sports and was an avid Iowa Hawkeyes and Chicago Cubs fan. Throughout his life, Arden served his community and in church in many capacities. He was a 17-year Carroll County Supervisor, Manning Trust and Savings Bank Director, Officer of the Holy Name Society of St. Augustine, Halbur, and Supporter of Gods Children Haiti Orphanage. Arden was a member of Carroll County Beef Producers, Carroll Knights of Columbus, Arcadia American Legion Past Commander, and lifelong member of St. Augustine Church in Halbur. Those left to cherish his memory include his wife Judy Hinners of Carroll; his children: Rhonda Hoffman of Carroll, Roxane (Keith) Rupiper of Roselle, Cheryl (Ken) Tiojanco of Omaha, NE, Steven Hinners of Halbur, Randy (Laura) Hinners of Cottage Grove, Oregon, Brenda Fay and significant other Shane McCann of Des Moines, Susan (Brian) Carlson of Elk Mound, WI and Chris (Tristan) Hinners of Halbur; 25 grandchildren and 26 great grandchildren, his brothers: Larry (Della) Hinners of Manning, Jack (Lois) Hinners of Halbur: his sisters-in-law: Lois Hinners of Carroll, Margaret Hinners of Manning, Helen Hinners of Halbur; his brother-in-law, Raymond Hacker of Halbur; Judy’s siblings and their spouses; as well as other extended relatives and many friends. Arden was preceded in death by his parents, Art and Loretta Hinners; his brothers: Don, Vernon, and Richard Hinners; his sisters: Jeanette Eischeid, Dolores Darveaux and Margie Hacker and his son-in-law, Michael Hoffman.

Arden Hinners, age 86, of Carroll, formerly of Halbur, died Saturday, March 27, 2021 at his home surrounded by his family. Mass of the Christian Burial will be celebrated at 10:30 a.m., Wednesday, March 31, 2021 at St. Augustine Catholic Church... View Obituary & Service Information

The family of Arden Hinners created this Life Tributes page to make it easy to share your memories.