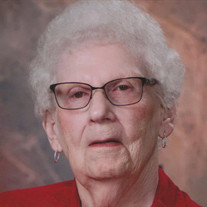 Ardella Irlbeck, 93 of Templeton, died Wednesday, March 6, 2019 at St. Anthony Nursing Home in Carroll. Mass of the Christian Burial will be celebrated at 10 a.m. Monday, March 11, 2019 at Sacred Heart Catholic Church in Templeton. The Celebrant will be Fr. Steven Brodersen. Music will be by Hannah Warner, and the Templeton Men’s Choir. Mass Servers will be Peter and Joseph Dea. Lector will be Mern Irlbeck. Gift Bearers will be Joan Seddon, Jan Wafful, and Joleen Janssen. Eucharistic Minister will be Charlene Rupiper. Casket Bearers will be Chad Seddon, Curt Irlbeck, Samantha Irlbeck, Austin Irlbeck, Marne Irlbeck, and Mason Janssen. Burial will be in the parish cemetery. The Carroll Catholic Daughters of the Americas and the Dedham American Legion Auxiliary will form an honor guard for the mass. Friends may call at the Sharp Funeral Home in Carroll after 2 p.m. on Sunday where there will be a Catholic Daughters of the Americas Rosary prayed at 3 p.m., and a Christian Wake Service will be held at 5 p.m. The casket will be moved to Sacred Heart Church in Templeton on Monday morning where visitation will continue from 9 a.m. to 9:45 a.m. Funeral arrangements are under the direction of the Sharp Funeral Home in Carroll, and online condolences may be left for Ardella’s family at www.sharpfuneral.com. Ardella, the daughter of Joseph and Frances (Wittrock) Bluml was born on May 12, 1925 at Halbur, Iowa. She grew up near Halbur, and attended St. Augustine School. On April 30, 1946 Ardella was united in marriage to Sylvester Irlbeck at St. Augustine Catholic Church in Halbur. The couple made their home in Halbur for a brief time, before moving to their farm east of Templeton in 1954. They continued to live there until 1984, when they moved into the Templeton Community. In addition to helping Sylvester with the farming operation, Ardella was a devoted homemaker. She was known for her baking, especially her pies and cooking. She raised a large garden, led many 4H groups, and worked various jobs outside the home, where she enjoyed serving and socializing with the public. In her free time she enjoyed playing cards, socializing, and spending time with her family especially her grandchildren. Ardella will be remembered for her great sense of humor, and her sense of hard work. She was a member of the Dedham Legion Auxiliary, Catholic Daughters of the Americas, and Sacred Heart Guild, and Parish in Templeton. Ardella is survived by her children: Joan Seddon of Templeton, Don (Denise) Irlbeck of Templeton, Jan Wafful of Carroll, Gary “Rooster” (Shell) Irlbeck of Templeton, Kevin (Lynn) Irlbeck of Carroll, and Joleen (Tony) Janssen of Glidden; daughter-in-law, Mern Irlbeck of Carroll; 13 grandchildren, 4 great-grandchildren; her siblings: Don (Carol) Bluml of Dubuque, Margaret Hinners of Manning, and Charlene Stork of Glidden; her sisters-in-law: Faye Bluml of Carroll, Bernice Bluml of Carroll, Sharon Bluml of Hawarden, and Lorraine Irlbeck of Carroll, as well as many nieces, nephews, and other extended relatives. She was preceded in death by her parents; her husband Sylvester in 2002; sons, Dale Irlbeck, and Mike Irlbeck, a son-in-law, Jack Wafful; a daughter-in-law: Glenda Irlbeck; and her siblings: Jerome (Bonnie) Bluml, Elmer Bluml, Delores Odendahl, Esther (Wayne) Rohe, Larry Bluml, Jim Bluml, Ardith (Albert) Sturm, and Glenn Bluml.

The family of Ardella Irlbeck created this Life Tributes page to make it easy to share your memories.