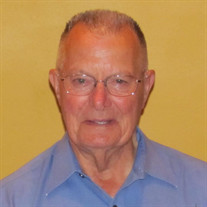 Archie Ricke, 91 of Arcadia, died peacefully on Thursday, December 16, 2021, at Journey Senior Services in Carroll. Mass of the Christian Burial will be celebrated at 10:30 a.m., Tuesday, December 21, 2021, at St. John Catholic Church in Arcadia. The Celebrant will be Fr. Timothy Friedrichsen. Concelebrant will be Fr. Richard Remmes. Music will be by Sharon Bierl and the St. John Choir. Lector for the Funeral Mass will be Chad Kohorst. Honorary Casket Bearers and Gift Bearers will be Kristine Iverson and Valerie Vetter. Eucharistic Minister will be Pat Vogl. Casket Bearers will be Jay Ricke, Matt Ricke, Steven Ricke, Chad Kohorst, Jason Kohorst, Joe Vetter, Adam Vetter, Brian Ricke and Kyle Ricke. Burial will be in St John Cemetery in Arcadia with military honors conducted by the Arcadia American Legion. Visitation will be held from 4:30-6:30 p.m. on Monday at the Sharp Funeral Home in Carroll. Face coverings are preferred. There will be no visitation prior to the Funeral Mass on Tuesday. Funeral arrangements are under the guidance of the Sharp Funeral Home in Carroll and online condolences may be left for Archie’s family at www.sharpfuneral.com. Born in Breda, Iowa on November 12, 1930, Archie was the son of Vincent and Julia (Ludwig) Ricke. He started grade school in Lidderdale and after his family moved to a farm near Carroll attended Sts. Peter and Paul School, later graduating from Carroll High School. After his formal education, Archie worked as a mechanic until joining the United States Air Force in December of 1951. He served four years as a jet mechanic during the Korean War until his honorable discharge. On July 22, 1952, Archie was united in marriage to Lillian Miller at St. Lawrence Church in Carroll. To this union where 5 children; John, Jim, Cindy, Ken, and Jane. Archie did mechanic work and farm tractor repair in Carroll until later opening Ricke’s Repair Shop in Arcadia. He retired in 1995 and worked part-time for various businesses including Carroll Aviation. Archie loved creating and building things; light house, barrel train that he gave rides to children in at parades, a train and railroad crossing in the rock garden and was in the process of building a wooden car. He had a huge Christmas display with thousands of lights on the evergreens with a life size nativity set in memory of his son John. Archie was active and instrumental in the Arcadia Community in many capacities including City Council, St. John Catholic Church, Arcadia American Legion, and Legion Color Guard. Archie is survived by his wife Lillian Ricke of Carroll; his daughters: Cynthia (Joe) Fleskes of Davis, CA and Jane (Gary) Vetter of Westside; his daughters-in-law: Deanna (Connie) Schoessler of Westside and Jaynee Ricke of Arcadia; 11 grandchildren; 16 great-grandchildren with 2 on the way; his brother, Larry (Carol) Ricke of Parkersburg; his sister, Sister Marlou Ricke of La Crosse, WI; as well as other extended relatives and many friends. Archie was preceded in death by his parents: Vincent and Julia (Ludwig) Ricke; his parents-in-law, Edmund and Hilda (Reiman) Miller; his sons: John, Jim, and Ken “Beanie” Ricke; his sisters: Ella Mae (Alvin) Reiff and Phyllis (Harold) Bluml; and his sisters-in-law: Bernice (Joe) Bekehermes and Arlene Eischeid.

The family of Archie Ricke created this Life Tributes page to make it easy to share your memories.

Send flowers to the Ricke family.