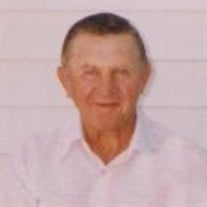 Andrew Schmitz, 96 of Willey, died Thursday, July 9, 2020 at St. Anthony Regional Hospital in Carroll. Private Family Services will be held on Saturday, July 11, 2020 at the Sharp Funeral Home in Carroll with Fr. Kevin Richter officiating. Casket Bearers will be Andy's family. Burial will be in St. Mary's Cemetery in Willey at 10:30 a.m. on Saturday with Military Honors conducted by the Carroll American Legion. The public is welcome to attend and are asked to abide by Co Vid 19 social distancing guidelines. Funeral arrangements are under the guidance of the Sharp Funeral Home in Carroll and online condolences may be left for Andy's family at www.sharpfuneral.com. Born on November 1, 1923 in Carroll, Iowa, Andrew Frank Schmitz was the son of John T. and Anna (Hackfort) Schmitz. He attended Webster Independent Country School which was across the road from his family’s home and then attended St. Mary’s School in Willey. Andy served in the United States Army during the Korean Conflict and upon his honorable discharge returned to the Willey area. He and his brother Louis farmed together from 1953 until retirement in 1986. In 2008, Andy moved to Carroll. He enjoyed fishing, trapping, gardening and being outdoors walking. An avid Detroit Tigers fan, Andy could name each of the starters from the 1935 World Series Team. He also enjoyed reading, paying attention to the stock market, and spending time with his nieces and nephews. Andy was grateful for the successes in had in life and was always motivated to give back. He quietly contributed to many causes and organizations over the years. His legacy of giving will continue through the Andrew F. Schmitz Charitable Trust. He was a faith filled man, livelong member of St. Mary’s Parish in Willey and member of the Carroll American Legion. Andy was proud to have been able to own the family century farm which was purchased by his parents in 1913. The last surviving child of ten, he lost his father at the age of seven, his mother successfully guided the family through the depression. Andy will be remembered as a kind man, who was a father figure, teacher and friend to many. Andy is survived by his sister-in-law, Betty Schmitz of Carroll, many nieces, nephews, and friends. Andy was preceded in death by his parents; his sisters: Leone Kitt, Rose Gross, Marie Werner, Louise Kennebeck, and Helen Schmitz; and his brothers: Leo, Louis, Edward and Paul “Pat” Schmitz.

The family of Andrew "Sam" Schmitz created this Life Tributes page to make it easy to share your memories.

Send flowers to the Schmitz family.