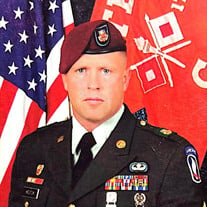 Andrew Jay Heuton, age 44 of Junction City, Kansas, passed away on March 8, 2022, in Salina, Kansas from complications related to a recent Covid infection. Mass of the Christian Burial will be celebrated at 10:30 a.m., Thursday, March 17, 2022, at Holy Spirit Church – St. John Paul II Parish in Carroll. The Celebrant will be Fr. Kevin Richter. Lector will be Don Nepple. Gift Bearers will be Amy Moorlag and April Fitzpatrick. Eucharistic Minister will be Bev Nepple. Honorary Casket Bearers will be Larry Moorlag, Travis Fitzpatrick, Grant Moorlag, Ryan Moorlag, Adam Munoz, Anthony Munoz, and Aaron Munoz. Casket Bearers will be Alex Lambertz, Jared Lambertz, Josh Lambertz, Larry Rogers, Jason Lambertz, Jacob Ruby, and Tom Remily. Burial with full military honors will be in the Carroll City Cemetery. Visitation will be from 5-7 p.m. on Wednesday at the Sharp Funeral Home in Carroll. Additional visitation will be from 9:30-10:15 a.m. on Thursday at the church. Funeral arrangements are under the guidance of the Sharp Funeral Home in Carroll and online condolences may be left for Andy’s family at www.sharpfuneral.com. Andrew was born in Flandreau, South Dakota on July 30, 1977, to Jean Lambertz and Virgil Heuton. He grew up in Lincoln Missouri, he graduated from Lincoln High school in 1995. In 1996 he enlisted in the US Army. Andrew also graduated from Arizona State University with a bachelors degree of Arts in History in 2012. He proudly served his country, first as an enlisted soldier and later as an officer, retiring as a Captain in 2019 after 23 years of serving his country. On May 22, 2000, Andrew was united in marriage to Jamie Cisco in Wichita, Kansas. Andrew was stationed all over the world including Fort Sill, OK, Germany, Arizona, and Fort Riley, Kansas. Andrew served selflessly, he had multiple tours in Afghanistan, Iraq, Kuwait, and Saudi Arabia during Operations Iraqi Freedom/Enduring Freedom. He was the recipient of many awards including a Bronze Star. Andrew is survived by his wife Jamie, daughter Ashley and sons Andrew and Ashtin all at home. Andrew also leaves behind his mother Jean Lambertz, sisters, Amy (Larry) Moorlag and April (Travis) Fitzpatrick and nephews, Grant and Ryan Moorlag. Andrew will be missed by numerous aunts, uncles, cousins and friends. Andrew was preceded in death by his father, Virgil Heuton, grandparents Lois and Leo Lambertz and Virgil and Leta Heuton and step-grandmother Gladys Heuton. Andrew gave the most selfless gift of all by being an organ donor.

Andrew Jay Heuton, age 44 of Junction City, Kansas, passed away on March 8, 2022, in Salina, Kansas from complications related to a recent Covid infection. Mass of the Christian Burial will be celebrated at 10:30 a.m., Thursday, March 17,... View Obituary & Service Information

The family of Andrew Heuton created this Life Tributes page to make it easy to share your memories.

Send flowers to the Heuton family.