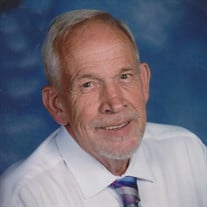 Alvin Reinart, age 75, of Carroll, passed away on Tuesday, May 5, 2020 at MercyOne Medical Center in Des Moines, Iowa. Private Family Funeral Services will be held at the Sharp Funeral Home in Carroll on Saturday, May 9, 2020 with Fr. Kevin Richter of St. John Paul II Parish officiating. Burial will be at a later date in Holy Family Cemetery, near Lidderdale, Iowa. A Live Stream Broadcast and recording of Alvin’s service can be found by visiting the Sharp Funeral Home Carroll, Iowa YouTube Channel at this link: https://www.youtube.com/channel/UCqd2eeRJk5RTdEJoEooUoAQ. An Icon on that page will be available by 10:55 a.m. on Saturday. Those wishing to mail their memorial may direct it to: Alvin Reinart Family c/o Sharp Funeral Home, 226 W. 8th Street, Carroll, IA 51401. Funeral arrangements are under the guidance of the Sharp Funeral Home in Carroll, and online condolences may be left for Alvin’s family at www.sharpfuneral.com. Alvin, the son of Hilbert and Cecelia (Reiff) Reinart was born on June 18, 1944 at Manning, Iowa. He grew up in Audubon and Carroll. After his schooling he entered the workforce. Most recently he was employed as a cook at Tony’s Restaurant and St. Anthony Regional Hospital. On June 17, 1983 he was united in marriage to Joan Ewoldt in Carroll. The couple made their home in Carroll, and welcomed their daughter Melissa Pearl Reinart in 1984. Alvin continued working until his retirement in 2015 when he and Joan moved to Boone to be closer to their family. Alvin will be remembered for being a caretaker of his family, always putting his family’s need above his own. Alvin’s passion was cooking but he also enjoyed fishing, bike riding, walking his dog Penny, gardening, camping and spending time outdoors. Most of all he enjoyed spending time with his grandchildren, Nile, and Bennett. Alvin is survived by his wife Joan of Carroll; his daughter: Melissa Hart and her husband Ryan of Boone; his grandchildren: Nile and Bennett Hart. His siblings: Roseann “Suzy” Willman of Webster City, IA, Darlene Jensen (Mark Sensat) of Houston, TX, and Mary Underberg (James) of Carroll; a brother: Jerome Reinart of St. Louis, MO; his brothers-in-law: Bob (Gloria) Ewoldt of Manning, Randy (Kathy) Ewoldt of Ankeny, Steve Ewoldt of Carroll; and several nieces, nephews, and cousins. Alvin was preceded in death by his parents, Hilbert and Cecelia Reinart, parents-in-law: Truman and Pearl Ewoldt; a brother, Paul Reinart; a brother-in-law Pete Willman; and sister-in-law Connie Ewoldt.

Alvin Reinart, age 75, of Carroll, passed away on Tuesday, May 5, 2020 at MercyOne Medical Center in Des Moines, Iowa. Private Family Funeral Services will be held at the Sharp Funeral Home in Carroll on Saturday, May 9, 2020 with Fr. Kevin... View Obituary & Service Information

The family of Alvin Reinart created this Life Tributes page to make it easy to share your memories.

Alvin Reinart, age 75, of Carroll, passed away on Tuesday, May...

Send flowers to the Reinart family.