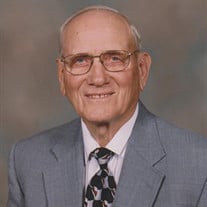 Alphons “Bud” Brincks, 89 of Carroll, died Sunday evening, April 2, 2017 at St. Anthony Regional Hospital in Carroll. Mass of the Christian Burial will be celebrated at 10:30 a.m. Thursday, April 6, 2017 at St. Mary’s Catholic Church in Willey. The Celebrant will be Fr. Timothy Johnson. Music will be by Barb Danner and the St. Mary’s Choir. Lector for the funeral mass will be Denise Brincks. Gift Bearers will be Rachel Brincks and Melissa Brincks. Eucharistic Minister will be LaVerne Greving. Casket Bearers will be: Kevin Brincks, Jeff Brincks, Jason DeMey, Chad Irlbeck, Keith Brincks, and Steven Brincks. Burial will be in St. Mary’s Cemetery in Willey. Friends may call at the Sharp Funeral Home in Carroll after 4 p.m. on Wednesday where there will be a rosary at 5 p.m. and a Christian Wake Service at 7 p.m. Additional visitation will be held one hour prior to the funeral mass in the St. Mary’s Parish Hall in Willey. Funeral arrangements are under the direction of the Sharp Funeral Home in Carroll and online condolences may be left for Bud’s family at www.sharpfuneral.com. Born on August 6, 1927 at Willey, Iowa, Alphons Brincks was the son of Joseph and Mary (Von Bon) Brincks. Bud spent most of his lifetime in the Willey area and attended St. Mary’s School. Following his schooling he began farming with his parents. On September 6, 1949 he was united in marriage to Ruth Tiefenthaler at St. Bernard’s Catholic Church in Breda. Following their marriage Bud and Ruth made their home on the Brincks family farm just west of Willey. Bud was engaged in grain and livestock farming and remained active in the operation until the past few years when he moved to Carroll where he was a resident at Westwood Knolls. Bud had a passion for farming and truly loved working. He enjoyed people; and always loved to socialize with his family and his many friends. Bud was lifelong member of St. Mary’s Church in Willey, where for many years was active with the St. Mary’s Choir. Left to celebrate his life are his children: Larry (Mary Kay) Brincks of Kimberly, WI, Richard (Donna) Brincks of Seymour, WI, Marilyn Murphy of Woodbury, MN, Mary Jo (Gene) Irlbeck of Carroll, Michael (Cathy) Brincks of Glidden, and Maurice (Denise) Brincks of Appleton, WI; 23 grandchildren; 34 great-grandchildren; one sister, Delores (Delbert) Kasperbauer of Carroll; his brothers-in-law and sisters-in-law: Henry Seidl of Carroll, Diane Brincks of Carroll, and Almyra (Marlo) Weitl of Templeton; as well as many nieces, nephews, other extended relatives and many friends. Bud was preceded in death by his parents; his wife Ruth Brincks in 2002; his son, Kenneth Brincks; his grandson, Timothy Brincks; his step-grandson, Michael Schumacher; and his siblings: Bernadine Rust, Roceal Knobbe, Agatha Hackfort, Melvina Hahn, Bernilda Seidl, Donald Brincks and Leonard Brincks.

The family of Alphons "Bud" Brincks created this Life Tributes page to make it easy to share your memories.