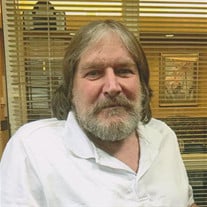 Allan Ray Schaeuble, age 64, of Sioux City, formerly of Carroll, passed away on November 30, 2017 at Westwood Nursing Home in Sioux City, after a brief battle with lung and brain cancer. A Liturgy of the Word Funeral Service will be held at 11 a.m. Wednesday, December 6, 2017 at St. Lawrence Catholic Church in Carroll. Fr. Brian Feller will officiate. Lectors will be Briana Schaeuble, and Derrik Bauer. Music will be by Kate Cuddy, and the St. Lawrence Choir with Steve Anderson as Cantor. Casket Bearers will be: Chris Dougherty, Carter Dougherty, Nick Schaeuble, Brody Stitz, Carson Stitz, and Spencer Pick. Burial will be at Mt. Olivet Cemetery in Carroll. Visitation will begin at 10 a.m. on Wednesday, at St. Lawrence Church, and continue until the time of the funeral service. Funeral arrangements are under the direction of the Sharp Funeral Home in Carroll, and online condolences may be left for Allan’s family at www.sharpfuneral.com. Al, the son of Ray and Delores (Rattenborg) Schaeuble was born on October 14, 1953 in Carroll Iowa. He was the third oldest of ten children. He attended grade school in Templeton, Storm Lake, and Battle Creek. While in grade school, Al played baseball. He and his brothers enjoyed fishing, hunting, and trapping. He graduated from Kuemper High School in Carroll. During high school, he worked at Fareway Grocery Store. After graduation, Al attended mechanic’s school at W.I.T. in Sioux City. He later worked at Farmland in Carroll, and Del Monte in Minnesota. Al battled mental illness since the age of 19. When his disease became more severe, and he couldn’t live alone, he lived in several group homes including Storm Lake and Guthrie Center. His mental health had been stable for decades when his physical health began to decline. Al moved to Sioux City in 2013 where he lived at Westwood Nursing Home. Al had a giving heart, and a brilliant mind. You would not have a dull conversation in Al’s company. Some of Al’s favorite things included: holidays with his siblings, nieces, and nephews, Stetson Cologne (spray bottle only), denim jackets, hooded sweatshirts with front pouches, playing the harmonica and guitar, listening to classic rock bands (such as The Rolling Stones, Canned Heat, and Lynrd Skynrd), Chicago Cubs, McDonald’s Cheeseburgers, Casey’s Pizza, Green Bay Packers (somewhat by force… thanks to his sister Melissa), and sharing stories of his wild adventures (like hitch-hiking to San Diego) when anyone came to visit. Al is survived by his mother, Delores Schaeuble of Sioux City, four brothers: Mike (Terri) Schaeuble of Bloomington, IN, Gary Schaeuble of Sioux City, Kevin (Shelly) Schaeuble of Kingsley, and Terry Schaeuble of Lake View. He is also survived by four sisters: Susan (Jim) Espinoza of Tucson, AZ, Lisa Schaeuble of Pipestone, MN, Tracey (Danny) Pick of Sioux City, and Melissa (Randy) Stitz of Green Bay, WI. He was preceded in death by his father, Raymond “Ray” Schaeuble; his brother, Richard Schaeuble; his grandparents, and several cousins, aunts, uncles. The family would like to extend extreme gratitude to Al’s caregivers, especially in his final years, including Dr. David Daniels, Dr. Ernesti, Dr. Haeker, Albert O’Kine PA, Dr. Kosta Antonopoulos, the staff at June E. Nylen Cancer Center, and all of the Staff at Westwood Nursing Home who he thought of as some of his closest friends.

Allan Ray Schaeuble, age 64, of Sioux City, formerly of Carroll, passed away on November 30, 2017 at Westwood Nursing Home in Sioux City, after a brief battle with lung and brain cancer. A Liturgy of the Word Funeral Service will be held at... View Obituary & Service Information

The family of Allan Schaeuble created this Life Tributes page to make it easy to share your memories.

Send flowers to the Schaeuble family.