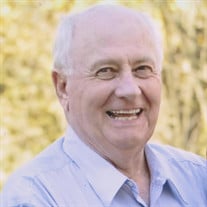 Allan Jacob Kuker died in his home on August 22, 2020 in Denison, IA. He was 81 years old. Mass of the Christian Burial will be celebrated at 10:30 a.m. Thursday, August 27, 2020 at Holy Spirit Church- St. John Paul II Parish in Carroll. The Celebrant will be Fr. Kevin Richter. Music will be by Jane Heithoff. Lectors will be Allan’s grandchildren: Tony Kuker, Zack Stence, Teddy Kuker, and Gretchen Brodersen. Casket Bearers will be Allan’s sons: Jake Kuker, Mathias Kuker, D.J. Kuker, Kurt Kuker; a son-in-law: Nick Stence, and a grandson Gunner Cornelius. Burial will be in Mt. Olivet Cemetery in Carroll. Those in attendance at the funeral mass will be required to wear a face covering, and practice COVID-19 restrictions. Visitation will be held from 5-7 p.m. Wednesday, at the Sharp Funeral Home in Carroll. Those in attendance will be asked to abide by all COVID-19 restrictions, and masks are recommended. There will be no public visitation prior to the funeral mass on Thursday morning. Funeral arrangements are under the guidance of the Sharp Funeral Home in Carroll, and online condolences may be left for Allan’s family at www.sharpfuneral.com. Allan Kuker was born on July 5, 1939 in Carroll, IA, number 8 of Mathias & Eleanor Kuker’s children. Allan graduated from Kuemper Catholic High School in Carroll in 1957. After attending Creighton University in Omaha, NE, he worked in construction in Nebraska and Montana, and was involved in constructing the minute man missiles. Allan stayed in Montana for several years, which was the setting for many of his best stories. Later, he returned to Carroll County and began farming. In 1975 he married Margaret Wiegand in Amarillo, TX. The Kukers made their home in Carroll County and began their family of seven children while continuing to grow their farming business. Allan remained active in the Carroll area farming community until his death this week. Allan loved spending time with his friends and family and had an avid interest in genealogy. He was a devoted father who enjoyed mentoring his children on farming and business, and later telling stories and sharing proverbial wisdom with his grandchildren, always with a twinkle of mischief in his eye. He was generous to a fault, and a welcoming host to any guest in his and Margaret’s home. Mr. Kuker is survived by his wife Margaret, their daughter & son-in-law, Laura & Nick Stence of Denver, CO and their two children; their son & daughter-in-law Jake & Cara Kuker of Onawa, IA and their four children; their son Mathias Kuker of Denison, IA; their daughter Erika Brodersen of Lincoln, NE and her four children; their son & daughter-in-law DJ & Larissa Kuker of Dunlap, IA and their two children; their son Kurt Kuker of Lake Forest, CA; their daughter Heidi Kuker of Denver, CO; his brothers Morris Kuker and Robert Kuker, and his sisters, Jacque Rattenborg, Lavonne Wernimont, Jolene Happe, and Rilla Soetmilk. He is preceded in death by his parents Mathias & Eleanor Kuker, his sister Lois Graham, and his brothers Evan, Marvin, Ronald, Richard, and Thomas.

Allan Jacob Kuker died in his home on August 22, 2020 in Denison, IA. He was 81 years old. Mass of the Christian Burial will be celebrated at 10:30 a.m. Thursday, August 27, 2020 at Holy Spirit Church- St. John Paul II Parish in Carroll. The... View Obituary & Service Information

The family of Allan Kuker created this Life Tributes page to make it easy to share your memories.