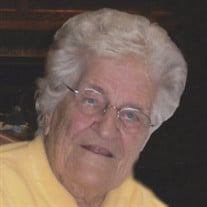 Alita Snyder, 101 of Breda, died Tuesday, May 22, 2018 at her home in Breda. Mass of the Christian Burial will be celebrated at 10 a.m. Tuesday, May 29, 2018 at St. Bernard's Catholic Church in Breda. The Celebrant will be Fr. Mark Stoll. Music will be by Marilyn Hundling and the St. Bernard’s Choir. Lectors for the funeral mass will be Joe Snyder and Ron Snyder. Alita’s granddaughters will present the offertory gifts. Casket Bearers will be Alita’s grandsons. Burial will be in St. Bernard's Cemetery in Breda. Friends may call at the Sharp Funeral Home in Breda after 4 p.m. on Monday where there will be a Christian Wake Service at 5:30 p.m. Funeral arrangements are under the direction of the Sharp Funeral Home in Breda and online condolences may be left for Alita's family at www.sharpfuneral.com. Born on July 19, 1916 in Carroll, Iowa, Alita was the daughter of Joseph and Katherine (Olbertz) Reinart. She spent her younger years in Carroll and graduated from St. Angela’s Academy in 1934. On February 16, 1942, Alita was united in marriage to Edgar Snyder at Sts. Peter and Paul Church in Carroll. Following their marriage the couple made their home northeast of Breda. Alita assisted her husband with their grain and livestock operation and also raised their children. Edgar and Alita moved into the Breda community in 1978. She was an avid Iowa State Cyclones and St. Louis Cardinals fan and enjoyed watching all sports. Alita loved spending time with her grandchildren and her children. She was a member of St. Bernard’s Church in Breda. Alita is survived by her children: Joe (Marilyn) Snyder of Leavenworth, KS, Ron (Pat) Snyder of San Leandro, CA, Tim (Kathi) Snyder of Breda, Ann (Russ) Polking of Tiffin, and Marty (Carol) Snyder of Breda; her daughter-in-law, Nancy Snyder of Wichita, KS; her son-in-law, Randy Holdren of Maxwell; 17 grandchildren; 21 great-grandchildren; her sister, Lucinda Ocken of Florida; as well as many nieces, nephews, and other extended relatives. Alita was preceded in death by her parents; her husband Edgar in 2009; her daughter Debra Holdren in 2008 and her son Jim Snyder in 2016.

Alita Snyder, 101 of Breda, died Tuesday, May 22, 2018 at her home in Breda. Mass of the Christian Burial will be celebrated at 10 a.m. Tuesday, May 29, 2018 at St. Bernard's Catholic Church in Breda. The Celebrant will be Fr. Mark Stoll.... View Obituary & Service Information

The family of Alita Snyder created this Life Tributes page to make it easy to share your memories.