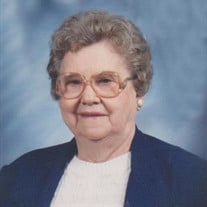 Agnes Stoolman, 96 of Carroll, died Tuesday, August 14, 2018 at St. Anthony Nursing Home in Carroll. Mass of the Christian Burial will be celebrated at 10 a.m. Saturday, August 18, 2018 at St. John Paul II Parish – Holy Spirit Church in Carroll. The Celebrant will be Fr. Kevin Richter. Con-Celebrant will be Fr. Steve Brodersen. Mass servers will be: Trey Olden, Grace Rock and Jon Paul. Music will be by Barb McDermott and the Holy Spirit Choir. Vocalists will be Susan Rock and Gabbie Rock. Lector will be Dr. Sharon Olden. Gift Bearers will be: Jackson Stoolman, Addison Stoolman, Katie Rock, Owen Rock, Lilly Krause, and Becca Rock. Eucharistic Ministers will be Cyril Venner, Luanne Kustra, and Nic Rock. Casket Bearers will be: Larry Rock, Dan Rock, Jason Stoolman, Matt Stoolman, Chuck Stoolman, Andy Stoolman, Dr. Linda Paul, Dr. Sharon Olden, Sarah Doerfler, and Rachel Stoolman. The St. Anthony Hospital Auxiliary will form an honor guard for the funeral mass. Burial will be in Mt. Olivet Cemetery in Carroll. Friends may call at the Sharp Funeral Home in Carroll after 3:30 p.m. on Friday, where there will be a rosary at 4 p.m. and a Christian Wake Service at 6 p.m. Additional visitation will be from 9-9:45 a.m. on Saturday at Holy Spirit Church. Memorials may be left at the funeral home or at the church to be directed to the Knights of Columbus Rosary Foundation. Funeral arrangements are under the direction of the Sharp Funeral Home in Carroll and online condolences may be left for Agnes’ family at www.sharpfuneral.com. Agnes Mary was born on September 5, 1921 at Willey, Iowa, the daughter of Max and Rose (Werner) Neppel. She spent her younger years near Willey and attended St. Mary’s School. Following the death of her father the family moved to a farm near Lidderdale. On February 14, 1942, Agnes was united in marriage to Donald Stoolman at Holy Family Catholic Church in Lidderdale. To this union were four children: Donna Faye, Norene, David, and Daniel. The family lived on the Stoolman Family Farm northeast of Lidderdale until 1977 when they moved to Carroll. Agnes worked at Kmart where she became known as “Kmart Aggie.” In 1987 Agnes retired and cared for her husband who passed away in 1988. She loved gardening, canning, playing scrabble, sewing and playing cards. Her greatest joy was spending time with her family. Agnes was a Prayer Affiliate with the Franciscan Sisters of Perpetual Adoration, and became known as “Sister Agnes.” Agnes was a member of the St. Anthony Hospital Auxiliary and St. John Paul II Parish. Agnes is survived by her children: Norene Stoolman of Omaha, NE and Daniel Stoolman of Carroll; her daughter-in-law, Susan Stoolman of Bullhead, AZ; 10 grandchildren; 17 great-grandchildren; her sister, Arlene Dalhoff of Carroll; her sisters-in-law and brother-in-law: Orsola Neppel of Jackson, NJ and Richard (Dora) Stoolman of West Branch; as well as many nieces, nephews and other extended relatives. Agnes was preceded in death by her parents; her husband, Donald Stoolman; her daughter, Donna Faye Rock; her son, David Stoolman; her daughter-in-law, Sheryl Stoolman; her son-in-law, Donald Rock; her great-granddaughter, Casey Iman Stoolman; her sister, Isabelle Feld; and her brothers: Ralph, Melvin, Arby, and Matt Neppel.

The family of Agnes Stoolman created this Life Tributes page to make it easy to share your memories.

Send flowers to the Stoolman family.