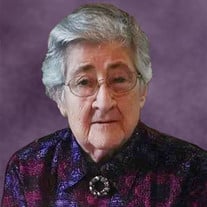 Agnes Sporleder, age 90, of Carroll, died Tuesday, November 7, 2017 at her home in Carroll surrounded by her family. Mass of the Christian Burial will be celebrated at 10:30 a.m. Monday, November 13, 2017 at Holy Spirit Catholic Church in Carroll. The Celebrant will be Fr. Timothy Johnson. Music will be by Mary Blinn and Sherry Loughran. Lector for the funeral mass will be Jennifer Schroeder. Gift Bearers will be: Angela Arenas, Sarah Martin, Jessica James, Jennifer Schroeder, Chelsea Wrider, and Whitney Whitaker. Eucharistic Minister will be Jessica James. Casket Bearers will be: Chris Humlicek, Chad Humlicek, Adam Humlicek, Tony Whitaker, Eric Betts, Ryan Betts, Jeff Tutmark, and David Tutmark. Burial will be in Holy Family Cemetery near Lidderdale. The Carroll Catholic Daughters of the Americas will form an honor guard for the funeral mass. Friends may call at the Sharp Funeral Home in Carroll after 3 p.m. on Sunday where there will be a rosary at 3:30 p.m. by the Carroll Catholic Daughters of the Americas. A Christian Wake Service will be held at 5 p.m. The casket will be moved to Holy Spirit Church on Monday morning where visitation will resume at 9:30 a.m. and will continue until time of the funeral mass. Funeral arrangements are under the direction of the Sharp Funeral Home in Carroll and online condolences may be left for Agnes' family at www.sharpfuneral.com. Born on May 14, 1927 at Odebolt, Iowa, Agnes was the daughter of Joseph and Caroline (Smith) Veit. She attended school in Odebolt and in her younger years moved to Dubuque where she worked in the convent and also held other jobs. Agnes moved to Carroll where she was employed at Pauline’s Restaurant. While in Carroll she met her future husband Lawrence Sporleder. Agnes and Lawrence were married on July 24, 1947 at Sts. Peter and Paul Catholic Church in Carroll. The couple made their home near Lidderdale until 1979 when they moved to Carroll. Throughout her working career she continued to work at Pauline’s Restaurant and also worked at St. Anthony Hospital as a ward secretary until her retirement in 1981. Agnes enjoyed quilting, sewing, baking and cooking. She traveled often with her husband and especially enjoyed trips to Oregon and Alaska. She also enjoyed playing cards and the many gatherings with the Weinie Roast Bunch. Her greatest love and joy was her family; she dearly cherished the time spent with her grandchildren and great-grandchildren. Agnes was a member of Holy Spirit Church and the Carroll Catholic Daughters of the Americas. Agnes is survived by her children: Caroline (Mike) Humlicek of Carroll, Connie (Darwin) Betts of Carroll, Christie (Rick) Whitaker of Glidden, Cynthia (Tom) Langel of Carroll, and Cathy (Peter) Tutmark of Canby, Oregon; 14 grandchildren; 29 great-grandchildren; her sisters-in-law, Georgina Veit of Florida and Vera Veit of Ute; as well as many nieces, nephews, other extended relatives and many friends. Agnes was preceded in death by her parents; her husband Lawrence Sporleder; a special nephew, Jerry Templeton; and her siblings: Clarissa Veit, Sally Sigler, Veronica Hewitt, Theresa Soyer, Joan VanCamp, William Veit, Charles Veit, and Albert Veit.

Agnes Sporleder, age 90, of Carroll, died Tuesday, November 7, 2017 at her home in Carroll surrounded by her family. Mass of the Christian Burial will be celebrated at 10:30 a.m. Monday, November 13, 2017 at Holy Spirit Catholic Church in Carroll.... View Obituary & Service Information

The family of Agnes Sporleder created this Life Tributes page to make it easy to share your memories.

Send flowers to the Sporleder family.