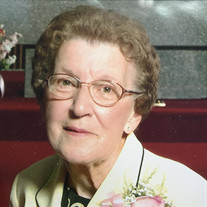 Agnes Louis, 92 of Carroll, died Thursday, May 04, 2017 at Regency Park Nursing Home in Carroll. Mass of the Christian Burial will be celebrated at 10 a.m. Tuesday, May 9, 2017 at Holy Spirit Catholic Church in Carroll. The Celebrant will be Fr. Timothy Johnson. Music will be by Barb McDermott and the Holy Spirit Choir. Lector for the funeral mass will be Tom Louis. Gift Bearers will be: Allison, Laura, Gabe, and Casey McCarville. Eucharistic Minister will be Joleen Schulz. Casket Bearers will be: Robert Louis, Andrew Louis, Cory McCarville, Tim Seidl, Mike Oswald and Scott Oswald. The Legion of Mary will form an honor guard for the funeral mass. Burial will be in Mt. Olivet Cemetery in Carroll. Friends may call at the Sharp Funeral Home in Carroll after 4:30 p.m. on Monday where there will be a rosary at 5 p.m. by the Legion of Mary and a Christian Wake Service at 6:30 p.m. The casket will be moved to Holy Spirit Church on Tuesday morning where visitation will resume at 9 a.m. and will continue until time of the funeral mass. Funeral arrangements are under the direction of the Sharp Funeral Home in Carroll and online condolences may be left for Agnes’ family at www.sharpfuneral.com. Born on July 21, 1924 at Willey, Iowa, Agnes was the daughter of Henry and Laura (Grote) Oswald. She spent her younger years near Willey and attended St. Mary’s School. On September 12, 1949, Agnes was united in marriage to Robert Joseph Louis at St. Mary’s Catholic Church in Willey. To this union were three children, Mary, Daniel, and Ann. Agnes was employed as a cook for Holy Spirit School, Carroll Manor, Daylight Donuts, Safeway Deli, and Grandma’s House. She was also employed at the Daily Times Herald before her retirement in 2007 at the age of 83. She enjoyed sewing for her children and grandchildren as well as tending to her garden where she shared the fruits of her labor with her family at friends. Agnes was a member of Holy Spirit Church and the Legion of Mary. Agnes is survived by her children: Mary Louis of Carroll, Daniel (Jerri) Louis of Alta, and Ann (Gene) Hicks of Scranton; her grandchildren: Robert Louis, Andrew Louis, Allison (Cory) McCarville, and Charles Hicks; her great-grandchildren: Laura McCarville, Gabe McCarville, and Casey McCarville; her brothers: Andrew Oswald of Omaha, NE, and Richard (Emily) Oswald of Coon Rapids; her sister-in-law, Violet Louis of Denver, CO; as well as many nieces, nephews, other extended relatives. Agnes was preceded in death by her husband Robert in 1971; her parents, Henry and Laura Oswald; her sisters: Genevieve Nees, Angela Nees, Marie Bell and Leona Seidl; and her brothers: John Oswald, Walter Oswald, and a brother in infancy, Eugene Oswald.

Agnes Louis, 92 of Carroll, died Thursday, May 04, 2017 at Regency Park Nursing Home in Carroll. Mass of the Christian Burial will be celebrated at 10 a.m. Tuesday, May 9, 2017 at Holy Spirit Catholic Church in Carroll. The Celebrant will... View Obituary & Service Information

The family of Agnes Louis created this Life Tributes page to make it easy to share your memories.

Send flowers to the Louis family.